naval officer in charge, was born on 25 December 1811. He passed for lieutenant in 1831 and was promoted to that rank on 20 March 1832. After serving in various ships, he was appointed to the 46 gun ship Stag, Captain Thomas Ball Sulivan (father of Bartholomew James SULIVAN) on 16 December 1836, then fitting out for South America, where Captain Sulivan took charge of the Brazils Station in the rank of commodore. On 17 November 1839, in Río de Janeiro, Sulivan appointed Tyssen to take command of the 10 gun ketch Sparrow in place of Robert LOWCAY and as officer in charge of the Falklands.

On 19 December, Tyssen anchored off the small British settlement in Port Louis, where he landed and took up residence in Settlement House, leaving John Seccome, his senior mate, in command of the Sparrow. Tyssen took charge of the settlement from Lieutenant William Robinson of the Arrow, who had been temporarily in charge on the departure of Lowcay. In Port Louis the ship's company of the Sparrow were employed roofing the storehouse and building a corral. On 29 February 1840 Tyssen informed the Admiralty that he had ridden over parts of the island, finding several places suitable for the plough. He also reported that according to Basilio, the c apataz of the gauchos, there were 40,000 head of wild cattle and 4,000 horses on East Falkland and 100 cattle on West Falkland, but that the wild cattle were more difficult to catch each succeeding year. In addition, there were 14 milking cows and 190 tame cattle in the settlement, but that there was a great need for horses suitable for riding. Only one of the settlers had a garden and they were all reluctant to build decent houses. On 17 February 1840 Tyssen sent the Sparrow to search for the non-existent Aurora Islands, reported to lie east of the Falklands, and then to proceed to Río de Janeiro for provisions; from where she returned on 24 April. HMS Actæon, Captain Robert Russell, visited Port Louis from 8-16 October enabling Russell to report that Tyssen's 'ability, zeal and active exertions for the improvement of the settlement, both public and private, deserved the greatest praise'. He added that Tyssen was much troubled by the depredations of North American sealers who had established themselves in many places on the islands off West Falkland and were taking not only seals but the wild cattle that Lowcay had transferred there. On 29 October the Sparrow was sent to San Salvador, with Charles MELVILLE as pilot, and later to Port San Carlos where several corrals were built, at least one of which was for horses. In January 1841 John Bull WHITINGTON arrived in Port Louis with the Mary Ann and the Susan, a number of settlers, stores and other requisites to set up an establishment. Tyssen, who had not been warned of their proposed arrival, was informed by Whitington that he was duly authorised by his brother, George Thomas WHITINGTON to take possession of certain lands and cattle in East Falkland (granted by VERNET to LANGDON) and requesting Tyssen to put him in possession of them. Tyssen could only reply that he had no authority to do so. However, he had no means to prevent Whitington from landing and establishing himself and his party in Port Louis. On 6 February Tyssen reported that some trees he had raised from seed were doing well, but that all the riding horses were in poor condition and their gear very inferior. In a further letter a month later, Tyssen said he was much concerned at the depredation of the American sealers reported by Charles MELVILLE and by Robinson, who had warned off several of them, but to no avail. In April 1841 there were 260 head of cattle in the settlement, which Tyssen supposed would be sufficient for the coming winter since British vessels were now calling much more frequently.

On 15 January 1842 the brig Hebe, master CJ Anderson, anchored in Port Louis, carrying Lieutenant Governor Richard Clement MOODY, with twelve sappers and miners and their families. Tyssen and Moody went overland on horseback to examine Port William and meet up with the Sparrow. The two returned to Port Louis overland and on 22 January Moody landed from the Hebe and formally assumed his post as the first governor of the Falklands. As Moody had no transport he detained Tyssen in order to make a cruise to the westward and down Falkland Sound, leaving on 11 February, but bad weather compelled them to return to Port Louis on 4 March. On 8 March Tyssen finally sailed for England, calling at Río de Janiero on 31 March and arriving at Chatham on 16 July, where he relinquished command. 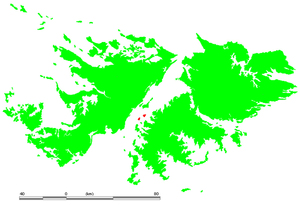 Location of Tyssen Islands - in...

In 1843 Tyssen was appointed to the schooner Montreal on Lake Erie and in 1846 to the steamer Mohawk on Lake Huron. He was placed on half pay in August 1848, but was promoted commander on 27 February 1850 and captain on 1 April 1865, when he was placed on the retired list. He died on 21 December 1893 from senile decay at Burrington, North Somerset and was buried in Holy Trinity Church. He was survived by his wife Mary. Tyssen Islands were named after him, possibly by Robinson, who surveyed Falkland Sound in 1841-2.