coxswain and sealer, landed on the Falkland islands on 1832 as coxswain for the boat of Lt SMITH, the naval officer administering the government. He seems to have been thoroughly competent: Lt LOWCAY wrote in his report of a surveying voyage by the Sparrow in 1838: 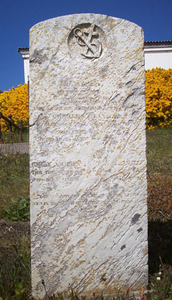 The headstone of the Melville family;...

I think it right to recommend Charles Melville as an excellent pilot for the Falklands. He is acquainted with every part of them, which knowledge he has acquired from being Master of one of the Sealing Schooners belonging to the Settlement and whilst on board the Sparrow conducted himself to my entire satisfaction. He was originally the coxswain of Lt Smith's boat's crew.

In the census of 1842, he was noted as the principal owner of the American schooner Montgomery (60 tons he resided in the schooner. In the 1843 census, he was noted as a sealer and whaler who had formerly owned four horses; and was building a new wooden house on no 11 allotment at Port Louis. He was out sealing from October 1842 to May 1843. Late in 1844, he appears to have purchased the English schooner Renira of 90 tons and undertook many minor errands around the Islands, moving government supplies and picking up shipwrecked seamen on Pebble Island. In July 1845, he wrote to Governor MOODY, asking that the seal rookeries be protected from foreign interlopers and for a licence to seal. Moody's reply was not promising. In August 1849 Melville became pilot in Stanley and by the 1851 census he had become the government coxswain in Stanley. In May 1851 he was interviewed by ExCo on pilotage work. In the Blue Book of 1875 Charles Melville is listed as 'Harbour Master & Boat Keeper - date of appointment 8 Sep 1848 by the Governor - annual salary £60-0-0.  He received a house rent free, £18 a year in addition as storekeeper, and an allowance of 6d a ton on water supplied to Merchant Shipping from Government Reservoir say £12 a year'.

He died on 25 October 1876 ('after a long and painful illness', reported Governor CALLAGHAN), one of the stalwarts of the early colony