naval officer in charge, was baptised in Montreal, Canada on 4 July 1797, son of Henry and Mary Smith. His first ship was the Courageux, which he joined in May 1810.

In 1832 Smith was first officer on the Tyne, Captain HOPE, when she visited the Islands and on her return from Peru he volunteered to become British resident at Port Louis. Without instructions and with only a boat's crew of four sailors, he was taken from Río de Janeiro to the Islands aboard the survey ship Challenger. He landed on 9 January 1834 and hoisted the flag the next day to a 21 gun salute from the Challenger. He found a dismal scene: RIVERO and the gauchos had murdered VERNET's senior colonists and the survivors had taken refuge on an island in Berkeley Sound. On 12 January Smith set out with a posse of marines and officers from the Challenger, but despite a long and difficult search found none of the offenders. A second search, helped by six marines left by Challenger, captured the four remaining gauchos who were shipped to England.

Smith proved an energetic and capable administrator who was prepared to use his own funds to promote development. 'I am in fact with regard to the few inhabitants, everything', he told Admiral Hamond, commanding the South American station. 'I have to supply them with all the necessities of life from a reel of pins to a poncho'. He did however expect to be allowed to seal on the Islands and a dispute arose with the Admiral who refused to allow Smith to ship his sealskins on a naval vessel and forbade him to engage in trade. Smith protested:

I am too poor and have too large a family to throw my time and money away in recovering the property of another [ie Vernet] and I have no other way of remunerating myself than taking a proportion of seal-skins. After 25 years I have only a Lieutenant's commission, a few honourable scars and I hope an untarnished name. 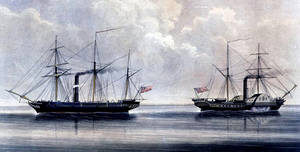 The propeller driven HMS Rattler in...

He was also outraged to find that the British consul in Río had granted the captain of the Susannah Ann permission to seal on the Falklands - in protest Smith tendered his resignation, without effect.

When Admiral Grey visited in 1836, he was impressed by the progress of the settlement. Smith had collected a small gaucho posse and there were 200 tame cattle with calves on the hills around Port Louis. The settlers were generally contented. Smith was in touch with Vernet who was trying to recover his property, which included the horses essential to the life of the colony. In 1835, being forbidden to engage in trade, Smith appointed his son Hugh as Vernet's agent, but the latter never recovered his property during Smith's time, and indeed precious little thereafter.

On 6 April 1838, Lt LOWCAY took over as resident and Smith returned to London. He sought compensation from the Colonial Office and wrote to the Secretary of State, Lord John Russell, detailing his expenditure and achievements. He was denied a meeting with the junior minister and coldly told to apply to the Admiralty for help. It was poor recognition for one who, in his own words: 'found it [East Falkland] a waste and a wilderness, recent scene of a horrid massacre. Instead of making or avoiding difficulties, I hope I did as became me, I surmounted those I met. Ambition had some share in it, but the good of my country was the mainspring...'

In December 1844 Smith was appointed in command of the sloop Rattler, which the following year was fitted with a screw propeller and took part in a series of trials against the paddle-sloop Alecto, to determine the most effective method of propulsion. These culminated in a tug of war in which the Rattler clearly triumphed. Smith was promoted captain in 1846. In 1853 he was appointed in command of the iron screw ship HMS Simoom for service in the Black Sea - the Crimean War was about to break out. Smith was commended for his zeal and activity, but died on board his ship at anchor in Varna Bay (Bulgaria) on 19 August 1854 - probably from cholera.

Smith married Eliza on 19 October 1832, but he had probably been married before, as his son Hugh was at least a teenager when he joined Smith at Port Louis in the mid-1830s.