naval officer in charge, was born in Portsea, Hants in 1792, the son of Henry and Peggy Lowcay. He entered the Navy in January 1806 as a first class volunteer on board the 98 gun Prince of Wales, possibly because his eldest brother Henry was serving on board. After serving in a succession of ships, including the Favourite, commanded by his brother Henry, in 1813, he was promoted to lieutenant in 1815. On 4 June 1816 Lowcay married Mary Ann Woodnutt in St Mary, Portsea. He then served in various ships as a lieutenant until 13 February 1837 when he was appointed in command of the 10 gun ketch Sparrow on the South American station. In November 1837 the Commander at Río, Admiral Hamond, sent Lowcay to the Falklands to relieve Lieutenant Henry SMITH, the naval officer in charge at Port Louis, and to report on the Islands, taking with him sheep, fowls and seed for the settlement. 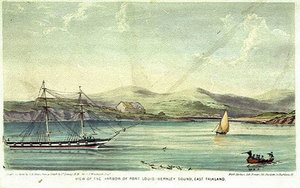 On his arrival in Port Louis, on 30 November 1837, Lowcay found only Smith, one of his boat's crew, a German tailor, a French gardener and three women; the other inhabitants were absent sealing in the schooner Montgomery. One of Lowcay's first tasks was to inform the master of the French whaler La Perseverance that the British government asserted in the strongest manner their sovereignty over the Falkland Islands and their right to prevent foreign vessels from fishing within three miles of the shore and that cattle, horses and wild animals were protected. Subsequently La Perseverance was wrecked near New Island, the survivors being taken to Río de Janeiro in the Montgomery.

In December Lowcay cruised round the Islands in an anticlockwise direction to assert British sovereignty and warn foreign vessels from sealing, whaling and hunting the wild cattle. He took with him Charles MELVILLE, one of Smith's boat's crew, as pilot, returning to Berkeley Sound on 31 December. 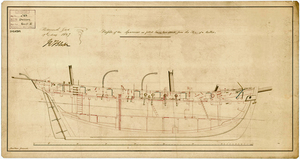 During 1838 Lowcay returned three times to Río de Janeiro. On 13 December he arrived back in Berkeley Sound on the same day as Lieutenant SULIVAN arrived in the Arrow to survey the islands. Sulivan reported that Lowcay was living at the time in one of two small houses in Port Louis, while Lauchlan MACKINNON, mate of the Arrow, noted that there were in addition three or four mud huts occupied by gauchos and their families, plus 200 tame cattle. In March 1839 Lowcay sent the Sparrow on a short visit to Gregory Bay (Bahía Gregorio), in the Strait of Magellan in an unsuccessful attempt to obtain horses. He himself sailed for Río de Janeiro for the last time in August 1839 and on his arrival there on 17 November he was superseded by Lieutenant John TYSSEN.

During his time in the Falklands all the good work done by Smith was allowed to deteriorate. By the time Tyssen relieved Lowcay, only twelve lassoing horses were left and the number of tamed cattle had fallen to 160. In a report to Lord Minto, first lord of the admiralty, Lowcay reported that the winter of 1839 was particularly severe; all the high land was covered in snow and drifting snow lay in the hollows for three weeks.

After several appointments in home waters, on 16 March 1844 Lowcay was appointed senior lieutenant on board the Bonetta, carrying out surveys in the eastern Mediterranean. This appointment, however, was very short as in November he was relieved and placed on half-pay. He died, still a lieutenant, in 1853.