naval officer and author, was born on 21 April 1815, the second son of William Alexander Mackinnon, chief of the Clan Mackinnon, and Emma Mackinnon, née Palmer.

He entered the navy on 1 October 1829 on board the 120 gun Prince Regent and afterwards served as a midshipman and mate in the Columbine, Belvidera and Arrow. In the last vessel, for which he volunteered, he served under Lieutenant Bartholomew James SULIVAN in 1838-9, carrying out surveys in the Falklands and taking with him two bloodhounds. 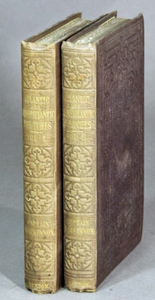 Although his first impressions were unfavourable, he concluded that the Islands were well adapted for colonization. He gave a description of the soil and the geology of the Islands, commented on the birds and fishes and included a table of the weather encountered.

In 1852 he published Atlantic and trans-Atlantic Sketches, afloat and ashore, portions of which, including 'Wild sports of the Falklands' were republished in various journals. He passed for lieutenant in February 1836, but was not promoted to lieutenant until 10 February 1842. 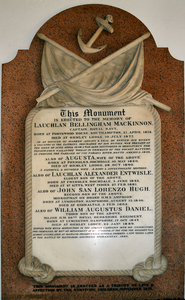 In June 1846, while serving in the steam-sloop Alecto, Mackinnon distinguished himself in operations in the River Parana against General ROSAS, for which he was promoted commander on 1 November 1847.

He was placed on the retired list with the rank of captain on I July 1864. On 9 August 1842 he married Augusta, daughter of John Entwisle of Foxholes, Yorks, MP for Rochdale.

See:  The complete text of Mackinnon's book 'Some account of the Falkland Islands 1850'