airman, was born in Sulivan House, Stanley on 17 January 1899, the elder son of Vere Packe and his wife Winifred, née Felton.

Vere Packe was the nephew of Captain Robert PACKE, and came out to take over Packe Brothers when the Captain died in 1895. He eventually sold the company and retired to England where he died in 1934.

During World War I, RC Packe joined the Royal Navy as soon as he was old enough and learnt to fly at HMS Daedalus (later RAF Cranwell) gaining his pilot's certificate as a flight sub-lieutenant on 3 July 1917. He was posted to the RNAS station a Great Yarmouth on the Norfolk coast defending the country against German Zeppelins. 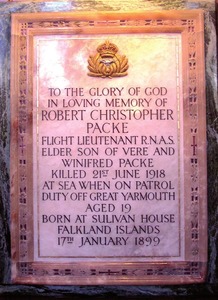 On 12 April 1918 he was forced to crash land at night after engine failure. Leaving his plane to telephone for help, the policeman guarding it managed to ignite some signal flares and destroy the aircraft.

Packe was not so fortunate on 21 June 1918 when a Sopwith Camel he was flying over the North Sea suffered engine failure. He was forced to ditch in a cross wind and the plane sank at once. His commanding officer described him as a splendid fellow and added: 'our loss is irreplaceable, but it is asking for trouble sending land machines out to sea'. 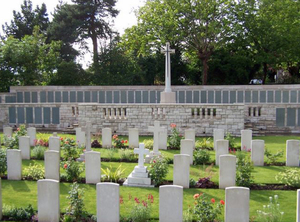 Robert Packe is commemorated at...

Packe was probably the first Falkland Islander to fly: a plaque in Stanley Cathedral commemorates his brief life.

The first Falkland Islander to fly was John Waldron Matthews, born at Port Howard on the 25th May 1890. He was Killed in action 1st August 1918 aged 28.

Editor's note: I have invited Ms Brook to prepare an entry for John Waldron Mathews. Precisely who was the first Falkland Islander to fly seems to me a tricky question, depending on how we define 'fly'. Is it first solo flight or formal qualification? DT: 7 May 2018.