was born in Booking, Essex, the son of Dr. George Cook Holmested and his wife Mary, née Nottidge. The family had been long established in Booking, near Braintree, Ernest's father being fourth in a line of doctors. Young Holmested could not contemplate following his father's profession, preferring the outdoor life, and the family sent him to gain experience on a sheep farm at Matson's, Timaru, New Zealand. He sailed on 17 April 1865 at the age of 19 and enjoyed the long journey, making many friends on the way. His stay in New Zealand was rewarding and he acquired valuable skills and experience, forming a strong friendship with New Zealander Wickham BERTRAND. The two decided to widen their horizons and acquire land for sheepfarming on their own account. They decided on South America, arriving at Valparaiso, Chile, on 12 August 1867. After travelling to Santiago they decided to cross the Andes and joined up with other New Zealanders. They set off on mules but had to abandon them because of snow, continuing the hazardous journey on foot, overcoming the weather and shortages of food. Holmested was a fit young man who enjoyed life and remained cheerful throughout, encouraging Bertrand through spells of sickness and exposure. They proceeded through bandit country to Cordoba where a cholera epidemic claimed the life of one of their group. The two friends received business offers in Argentina but none appealed to them. 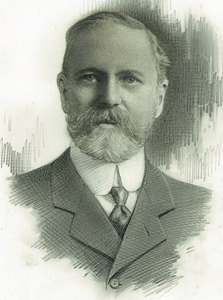 They were then informed by an agent of excellent prospects of land for sheepfarming in the Falkland Islands. Bertrand and another of their party, the German Switzer, decided to visit the Falklands to look at possibilities with Holmested remaining in Argentina to preserve funds. He undertook temporary work until the two men returned with the welcome news that they had leased Shallow Bay, in West Falkland. They had also obtained a lease on New Island which would provide the sheep and cattle they needed at Shallow Bay. The three men sailed on the schooner Louise and arrived on 3 July 1868 after a hazardous journey. The Shallow Bay and New Island documentation was in the names of Bertrand and Switzer but now Holmested was formally brought in and appointed to manage Adelaide Station (as the new Shallow Bay farm was called) and to supervise the movement of stock from New Island.

Holmested went to New Island on the Mission schooner Allen Gardiner. The ship left with the wool leaving Holmested with just two shepherds to restore and organize the farm before the arrival of Jacob LEE and his wife who were to run it later in the year. When the schooner Fairy arrived with Switzer on board they were able to ship the stock to Shallow Bay. To establish Shallow Bay as a well founded, well organised and viable sheepfarm required many years of very hard work and much hardship: Holmested's early days, for example, were spent under canvas stretched over boulders. Adelaide Station benefited from the new sheep-dipping process pioneered by Bertrand for the Falkland Islands Company which was remarkably successful in reducing the incidence of scab*. The lack of fencing was a problem and the absence of a vegetable garden posed problems for food supplies. Early settlers like Holmested encountered setbacks almost daily such as the loss of favourite horses and unexplained deaths of rams through sickness. The farm expanded, however, with the recruitment of extra hands. Bertrand completed his work for the Falkland Islands Company and was able to join Holmested at Shallow Bay, enabling Holmested to take leave to England in 1871. Bertrand had married Catherine Felton and now had two children but friction was developing between the two men and Holmested took the opportunity of leave to seek a new partner. 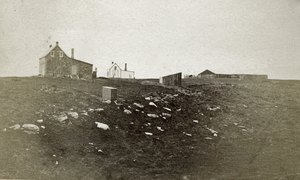 Holmested returned with a contemporary named Rees and they jointly acquired Adelaide Station of 110,000 acres with Bertrand taking a Crown Lease on 171,000 acres elsewhere on West Falkland. Following a difficult start the two men worked together well but Rees returned to England to marry and the relationship between the men was never again a happy one. Both Bertrand and Rees were newly married and perhaps understandably their loyalties and priorities were mixed. Holmested was a dedicated hard-working man who set high standards and aimed to maintain and develop what he had achieved to date. He was not, however, wholly single-minded, being a likeable man who enjoyed life. Both Holmested and Bertrand had developed a liking and trust for the Falkland Islands Company's colonial manager, FE COBB, which was reciprocated and was now to have a great influence on the future of Adelaide Station. Cobb had married Emily Blake and returned to the colony with his bride and her brother Robert BLAKE who was on an exploratory visit. Cobb and Holmested arranged for Blake to stay at Adelaide for a while and he quickly established an affinity with Holmested which led to him replacing Rees in the partnership from 31 January 1874. Their partnership survived religious and personal differences and endured until the farm was sold to the Government for sub-division in the aftermath of the 1982 conflict with Argentina. Cobb wrote of them in 1875: 'Mr. Ernest Holmested, the principal, is, like his partner, exceedingly energetic and they bear the reputation of being the most hardest workers in the West Falkland'.

The farm grew and developed in the face of setbacks and fluctuations in the wool market. Running a sheepfarm in the Falkland Islands has always been a difficult life for a single man and these two young farming pioneers often talked of their plans for the future, inevitably, given the shortage of feminine company in the Islands, looking to England for wives. They did not have an easy life with their working day during the peak season extending from 4am to 8·30pm. 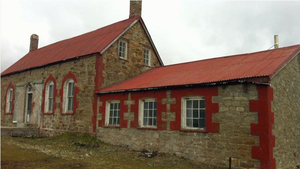 Blake became engaged whilst on leave in 1878 and planned to marry in 1880 but Holmested exercised his seniority by marrying in June 1880 Edith Templar Davies, the daughter of a doctor from Hampstead, London. The two marriages meant that an agreement was necessary on accommodation and this was achieved by establishing a new main settlement at Hill Cove where the Blakes would live with the Holmesteds remaining at Adelaide Station. The farm prided itself on its forward-looking policies particularly in the breeding of rams and land drainage. Stocks increased annually, weather permitting, and reached 25,000 sheep in 1888. A new dip of lime and sulphur was introduced in 1877 and although Holmested complained it left his hands indelibly stained and sore, it was very effective. Shallow Bay is 12 miles from Hill Cove which enabled the two young families to develop without friction despite differences in temperament between the two farmers which was reflected in the upbringing of the children. The Holmesteds had three children, Herbert Stirling, (b1878), Mary Malvina (b1881) and Caroline Adelaide Edith, (b1893). Holmested returned to England in 1889 through ill health, settled in Bedford and died there in 1916.