historian, was born in Bexley, Kent, the eldest of four children of James Lepard Boyson, a shipbroker, and his wife Alice Constance, née Duke. When she was two the family moved to Bordeaux in France, but they had returned to Kent by 1901. She began to earn a living as a typist of manuscripts and a compiler of catalogues for antiquarian booksellers. 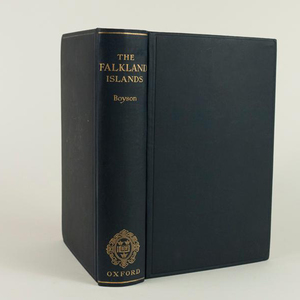 In about 1918 she was asked by Rupert VALLENTIN to edit his notebooks of Falkland Islands natural history with a view to publication. She suggested that the work might be of more general appeal if he appended a history of the Islands to the book. Vallentin was too busy to undertake the necessary research and suggested Boyson should write the history as well as editing the notebooks. She agreed and wrote to Lord Milner, Secretary of State for the Colonies, seeking permission to consult Colonial Office files, with particular reference to the events of 1832 and 1833 when the colony was formally established. The Colonial Office were not prepared to allow complete disclosure - she was permitted to see the official reports but not to read the correspondence.

By late 1923 she had finished the work, which now comprised the history, sections on the industries, geophysical notes and an appendix of statistics all by Boyson and the Zoology by Vallentin. The Clarendon Press in Oxford agreed to publish the work but wanted the costs subsidised. Miss Boyson approached the then governor of the Islands, John MIDDLETON, who was keen to see the book published and arranged a grant of £100 from the Colonial Office. This presented difficulties on two fronts. First, the government indicated that they believed the grant gave them editorial control and were most anxious that nothing in the book could be used to promote the Argentine claim to the Islands. Second, Vallentin wished to refuse the government grant lest its acceptance led to a boycott of the book by the sheep farmers. Miss Boyson dismissed this idea, writing to the publisher Kenneth Sisam '...there are precisely 21 sheep farmers only 5 of whom ever open a book'.

Initially intended for publication in April 1924 to coincide with the opening of the British Empire Exhibition, copyright issues for the illustrations delayed the book until September. The Times included it in the new books list on 10 and 24 October but did not review it. The Royal Geographical Society Journal did review it in March 1925 and described the book as '...important and most useful'. But sales were not encouraging; the first edition went out of print only in 1942.

Despite limited sales the importance of the book should not be underestimated. Boyson discovered many previously unpublished or unpublicised documents relating to the discovery and subsequent settlement of the Islands both in the Colonial Office and the British Museum. Almost all subsequent histories of the Islands have drawn extensively on her work, which remains the standard work on the history of the Islands.

Always a reclusive character, she retired in about 1937, and died in Arundel Hospital in West Sussex on 20 June 1946.