naturalist, was born on 15 November 1858 at Walthamstow, east London, younger son of Sir James Vallentin, a distiller and a knight sheriff of London (who died when Rupert was only 11 years old), and Susannah, née Hartley. Rupert was educated at private schools before working in Northern Queensland as a clerk in Court. Back in England at the age of 21, Vallentin inherited 'sufficient private means to satisfy his moderate requirements'. He was particularly interested in zoology, and studied for a time at the University of Munich, Germany. After working as a marine biologist on the Clyde, he moved in 1887 to Falmouth in Cornwall where he established a small laboratory to investigate the marine fauna of the Fal estuary. He was elected a fellow of the Linnean Society of London in 1889. Vallentin wished to compare Cornish fauna with that of a similar latitude south of the Equator and chose Stanley harbour. He sailed in the SS Tanis on 4 October 1898. On board was a young widow, Elinor Nicol (née Bertrand). They discovered common interests in natural history, spent time at her family home at Roy Cove and made collections of flowering plants, ferns and marine algae for the British Natural History Museum. In 1899 they also brought back collections of Medusae (jellyfish), Crustacea (jointed-limbed shellfish) and Diptera (two-winged flies). 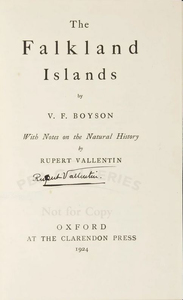 Vallentin's second visit to the Falklands was in 1901-02. He clearly showed enthusiasm for fieldwork in the Falklands when he wrote (1904) that he considered himself lucky to have 'the most southerly zoological station in the world'. Vallentin contributed six valuable chapters on Zoology and Seaweeds to the first comprehensive book written about the Falklands by Violet F BOYSON (1924).

On his return to England, Vallentin brought back 'a few fragments of scratched rocks from a Penguin-rookery, and also a pair of Penguin's feet'. He left these with Dr Bowdler Sharpe at the Natural History Museum pointing out that the nails on the feet fitted the markings on the rocks. This material caused discussion and dissension amongst British scientists for years. Vallentin later sent a large slab of scored rock to Sharpe, who acknowledged the 'nice block of scored stone' in April 1904 but 'did not feel so sure about the marks being the work of Penguin's feet'. A long letter from Vallentin was read and photographs exhibited to the British Ornithologists' Club (BOC) in 1905. 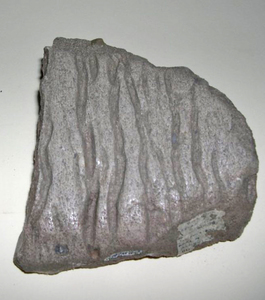 Vallentin said that his attention had been drawn to this phenomenon by Arthur FELTON of West Point Island and that 'several of the more observant settlers' had known for years that the rocks over which the Rockhopper Penguins Eudyptes chrysocome climbed to their colonies 'become in time scratched by the nails at the ends of the birds' feet.' His photographs of grooved rocks were examined by the Club members, including one of a Rockhopper climbing a scored rock face that is still in the archives at the Natural History Museum (1902.11.22.4). Dr Bowdler Sharpe reminded members that expert geologists had 'expressed their opinion that the scores on the rocks were caused by the action of water &c. and not by the claws of the Penguins'. After discussion, BOC members generally were of the same opinion. This scoring of steep and shiny rock surfaces is now well known at Rockhoppers' traditional landing sites. Vallentin believed himself to be the first person to place this on record; he was correct while the doubting geologists and ornithologists were wrong!

He married Elinor Nicol in Cornwall in March 1904 but they did not return to the Falklands until September 1909, for his third and last visit which extended until 1911. During that period, he collected more than 180 birds' eggs; some were sent to the Natural History Museum in 1913 but the majority were given after his death by their son Thomas (b1913). The value of Vallentin's marine fieldwork a century ago is still being recognised; some of his biological specimens were used in an investigation into the effects of oxygen availability on the maximum sizes reached by more than 2000 amphipod species worldwide, published in 2004. 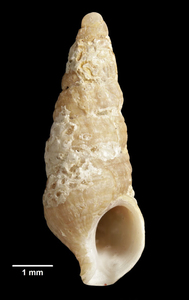 His ornithological knowledge was less detailed and some of his comments have since confused ornithologists and museum curators. In his 1904 paper and the chapter 'Birds' in Boyson (1924), a few species are incorrectly named while characteristics of two species are described under one name. It should be remembered, however, that when Vallentin was in the Falklands and until a year before his death, there was no published material to identify Falkland birds.

A very important contribution to Falkland natural history was his personal and financial support for the publication, in 1921, of his wife's fine watercolour paintings of Falkland flowering plants and ferns. This book is now a collectors' item, being one of the last books published with hand-coloured plates. Elinor VALLENTIN died in 1924 and following her death, the family moved to Exeter. Vallentin died in November 1934 after about ten years investigating the freshwater fauna of the Exeter Ship Canal and making the initial discovery of a species of freshwater jellyfish.

His obituary appeared in the Journal of the Linnean Society of London where his former colleague, JT Cunningham, commented on Vallentin's love of nature and the open air and remarked on the thorough and systematic manner in which his work had been carried out. Though shy, solitary and sensitive in his youth, he had a strong character and developed the skill of making and keeping friendships with other naturalists. He deserved great credit 'for the real services which he rendered to zoology as collector and ecologist'. This must be one of the earliest examples of the term 'ecologist' which was not in popular use until the 1960s.

Thomas Stebbing; 'On some crustaceans from the Falkland Islands collected by Rupert Vallentin'; Proceedings of the Zoological Society of London; 22 May 1900

GA Boulenger; 'A list of fishes collected my Mr Rupert Vallentin in the Falkland Islands; with notes by the collector'; Annals and Magazine of Natural History; 1900.

Violet E Boyson; The Falkland Islands, with notes on the natural history by Rupert Vallentin; 1924