botanist, was born on West Falkland on 14 January 1873, to William Wickham BERTRAND and his wife Catherine, née Felton, the third of their ten children.

Elinor's father had been in partnership with Ernest HOLMESTED, but in early 1873 was in the process of moving from Shallow Bay to Roy Cove and here Elinor grew up. She and her family lived in a beautiful rambling house close to the creek, and which looked north over a deep valley. It was here that her interest in plants began, living as she did in one of the more remote and interesting areas of the Falklands. She and her sisters were all excellent horsewomen, though the younger sisters considered it boring to ride with Elinor because she was always stopping to look at or to collect plants. 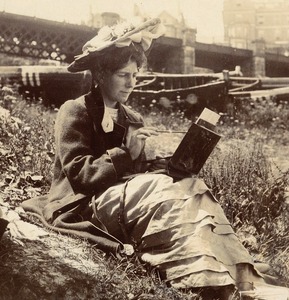 Dean BRANDON married Elinor to Robert Nichol on 1 June, 1894 at Roy Cove. They travelled immediately to Darwin, East Falkland, where Nichol was the Falkland Islands Company's manager. He was an Australian from Darwin (Northern Territory), and had been appointed Camp manager in 1889, relieving FE COBB. Nichol became ill, and died in London 4 November 1896 and Elinor returned to Roy Cove, accompanied by her mother and one of her sisters, in January 1897. It seems that she went away again, because she is recorded as returning to the Falklands with one of her sisters in November 1898 on board Tanis. On board also was Rupert VALLENTIN, and collections of marine algae, ferns and flowering plants were received from both of them at the British Museum (Natural History) in February and March 1899.

Rupert Vallentin returned to the Falklands in the summer of 1901-2, to continue his collections. He and Elinor Nichol were married in March 1904, and lived in St Ives, Cornwall, then in 1909 moved to Mawnan, near the Helford River, south of Falmouth. She had studied botany at the Royal Botanic Gardens, Kew and on her return to the Falklands with her husband in 1909 she spent much time making careful coloured drawings of the local plants. Before she left England it had been suggested to her that the flowerless plants that reproduce by spores (crytogamic flora) would well repay investigation, nothing of importance having been added to the Kew collection since those collected by HOOKER; and this she did. 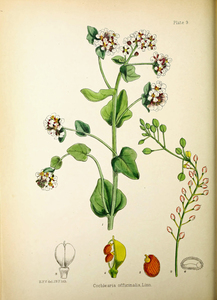 An illustration of a Falkland flower...

The Vallentins were in the Falklands for two years, and most of her collection of more than 560 specimens of at least 143 species of flowering plants came from West Point Island, Hope Harbour, Roy Cove, Shallow Bay and Port Egmont, all on West Falkland. These included the specimens used by Elinor for her coloured illustrations. About 400 specimens of marine algae, 50 species of fungi and many lichens were brought to the UK, all being very carefully packed and in excellent condition. These specimens are now at Kew, the British Museum and Manchester University Museum.

The Vallentins returned to England in 1911, and by November 1912 plans were being made to publish a book on the flora of the Falkland Islands, copiously illustrated with coloured plates drawn from living specimens. These botanical drawings had already been exhibited in Stanley, at a general meeting of the Linnean Society London, and at the exhibition of the Royal Cornwall Polytechnic Society, and are recorded to 'have met with universal approval'. 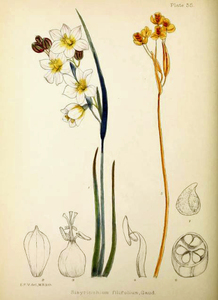 In April 1913 their son and only child, Thomas, was born and publication plans were postponed. In 1916 Mrs. Vallentin's health broke down permanently, and later her husband decided to issue the volume, entrusting the arrangement of the drawings to Miss Smith and the descriptions to Mrs EM Cotton. The Flora of the Falkland Islands was published in 1921, and was very favourably reviewed in the Times, Spectator, and Western Morning News and Mercury. Elinor Vallentin died in Devon in March 1924, never having returned to the Islands.

See:  Illustrations of the flowering plants and ferns of the Falkland Islands - an online version of Vallentin's book

C V B Marquand; 'Additions to the Flora of the Falkland Islands'; . Bulletin of Miscellaneous Information (Royal Botanic Gardens, Kew); 1923

A D Cotton; Cryptogams from the Falkland Islands collected by Mrs Vallentin; Botanical Journal of the Linnaean Society; 1915