botanical artist, born at Tipperary, Ireland on 8 August 1887, daughter of William Howe-Hennis and Elizabeth Charlotte Howe-Hennis, part of a well-respected Protestant family, among them several doctors and army officers. In 1910, at the age of 23, Frances Howe-Hennis came from Ireland as governess for the children of Howard and Mabel Clement at Roy Cove settlement, West Falkland. She travelled on the Pacific Steam Navigation Company's RMS Oravia from Liverpool to Stanley, arriving on 21 September. She wrote that she would never forget her first impression of the Islands: she was 'expecting something sombre and gloomy' but described her early morning view while the ship passed through the Stanley Narrows, as 'a most picturesque scene'. The atmosphere was clear, the sky a beautiful blue and 'there was no lack of beauty. The ruggedness of the scenery had a charm of its own. It was nature in her wild state, yet beautiful and so free'. 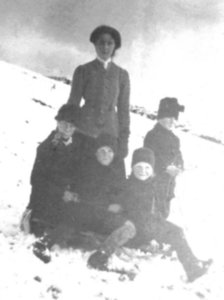 She left Stanley on the Ramna, a whaler from the station at New Island and because she could not be taken directly to Roy Cove was 'dumped on a station further down the East Island with the promise of being picked up in a few days'. Frances Howe-Hennis and fellow passengers arrived without invitation 'vaguely wondering how we should be received' but the reception had 'as much warmth and welcome as if we had been long-expected guests'. She felt that West Falkland was 'certainly the place for nature lovers. Here the mountain peaks run in chains, behind which other peaks rise and fade away, and the "distance lends enchantment to the view".' She lived at Roy Cove for three and a half years.

Little would be known about her activities in the Falklands if, on her return to Ireland, she had not written Reminiscences of a Sojourn in the Falkland Islands. This typed text of about 4,000 words includes her own small sepia photographs on almost every page and there are 53 beautiful coloured plates of Falkland flowering plants and one of a green spider and butterfly. In addition there are four landscapes, three of West Point Island harbour with different vessels (including the cutter Alice and the schooner Gwendoline) and one of Herbert's stream, Roy Cove; two of these are signed 'F.J.H' and one 'F.J. Hennis'. Frances Howe-Hennis had a keen interest in studying natural history, particularly the 'new' plants that she found in the Falklands. Her paintings show that she was also an accomplished watercolourist. The Reminiscences with chapters on life in a typical Camp settlement, the Kelpers - clearly showing their reliance on horses, her first Christmas and her visit to West Point Island, are a valuable social history of the Falklands before World War I. 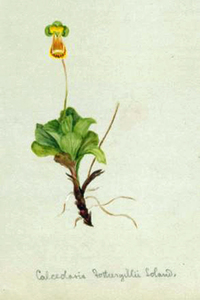 She wrote about a few flowering plants, including the Pale Maiden 'with its white yet almost transparent cup-shaped blossoms' which she thought was aptly described as the Falkland Snowdrop because it was the first flower seen after winter. Others mentioned were Scurvy Grass, Vanilla Daisy, the berry-bearing Diddle-dee, Teaberry and the Christmas Bush which was used to decorate houses at Christmas time. Letters from the Royal Botanic Gardens at Kew show that Frances Howe-Hennis sent a large collection of seaweeds to Kew in July 1914, for examination and naming. She collected plants for her paintings and also sent dried and pressed examples of about 20 species for the herbarium of the Department of Botany at the Natural History Museum (NHM) in London. These include the inconspicuous and now [Critically Endangered] Fuegian Whitlowgrass Draba magellanica probably from Roy Cove, one of only three specimens of this plant from the Falklands at the NHM. She sent paintings for identification and the different handwriting used for plant names on her plates suggests that these were passed between specialists in different families of plants.

Frances Howe-Hennis obviously enjoyed her time at Roy Cove and developed a close relationship with her employer Mabel Clement. In the Reminiscences on a page below typed text and a photograph, there is a short poem dedicated 'To You (My sister)', handwritten and signed by Mabel in 1917. Frances left Stanley on 16 April 1914 aboard RMS Oriana, probably reaching her home before the start of World War I. Though she wanted to train as a doctor, funds were not available so she trained as a nurse and sanitary (environmental health) inspector in Dublin. Frances Howe-Hennis worked as a health visitor for 33 parishes in Kent for several years and needed transport. Based on her experience in the Falklands, on appointment she asked if she could have a horse. The senior medical officer thought this was not seemly, so she had to be content with an Austin Seven! It was in Kent that she met an insurance agent, Frank Butler, and they were married on 16 April 1923. According to her son Frank (Barney) (b1926), she did not take photographs nor paint flowering plants again. She died on 19 January 1976 in the London Borough of Enfield. 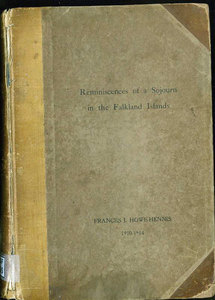 Reminiscences of a Sojourn in the...

The reappearance of Reminiscences of a Sojourn in the Falkland Islands after 90 years was fortuitous. The text and paintings had been sent to the publisher Tony Nelson and in mid-2001, after discussion with her son, it was agreed that the volume could be taken to the Falklands later that year. The complete text of the Reminiscences was published in the Falkland Islands Journal in 2003 and her painting of the Lady's Slipper Calceolaria fothergillii appeared on the cover of the 2004 edition. Coincidentally, this was soon after research had shown that this flowering plant is endemic to the Falklands. Her paintings of flowers, almost all of native species including endemics, are impressive and also deserve to be published. Her Reminiscences, including the paintings and original letters relating to her collections, are now on loan to the Falkland Islands Government Archives in Stanley and available for study.

See: Falkland Islands Journal 2004 (Front cover of this publication shows the Howe-Hennis painting of the Calceoleria forthergillii  (The Lady's slipper) There is also a short article in the 2004 edition of the Falkland Island's Journal on the Lady's Slipper by David Broughton

See: Reminiscences of a Sojourn in the Falkland Islands 1910-1914 by Frances Howe-Hennis - 1915C.pdf(The downloadable PDF file of the Howe-Hennis book can be accessed, but copyright remains with the family, and prior agreement from the Jane Cameron National Archives must be obtained for use of any images)