American ornithologist, was born in Belgrade, Maine, the son of Dr Olin Sewall Pettingill and Marion Groves. He studied for three years at Bowdoin College, where a visiting lecturer, Dr Robert Cushman MURPHY of the American Museum of Natural History, developed his interest in ornithology. 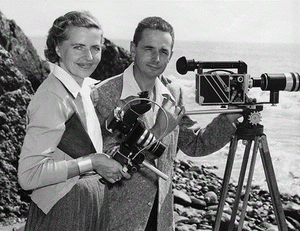 Pettingill commenced his studies at Cornell University in 1930 and prepared his doctorate on the American Woodcock. In 1932, he married his childhood sweetheart Eleanor, who shared his interests, and they had two daughters. His abridged dissertation was published in 1936 and in the same year, he joined the staff of Carleton College in Minnesota. There he wrote several classic, ornithology textbooks and his lectures, radio talks, magazine articles and films inspired and encouraged students and amateurs alike. He became director of the Laboratory of Ornithology at Cornell University in 1960, retiring in 1973.

With skills in motion and still photography and the successful filming of Atlantic Puffins, Pettingill was commissioned by Walt Disney Studios to film penguins. He worked with his wife in the Falkland Islands from October 1953 to March 1954, obtaining valuable footage of penguins on their breeding grounds. Pettingill wrote an account in the National Geographical Magazine in 1956, while Eleanor vividly described their experiences on Kidney Island and New Island and the people they met in the Falklands in Penguin Summer (1960). 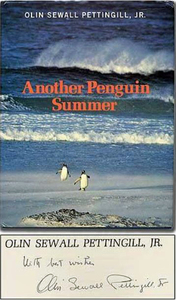 They returned to the Falklands from November 1971 to March 1972, partly under the auspices of the National Geographic Society and made three further short visits. Pettingill published scientific papers on the effects of weather and climate on our breeding birds (1960), passerines (1974), Gentoo, Rockhopper and Magellanic Penguins (1960 & 1964) and Kelp Geese and Steamer Ducks (1965). Another Penguin Summer containing many delightful photographs and describing the behaviour and the breeding cycles of the five resident penguins was published in 1975.

Pettingill participated in many other films and continued writing and revising his earlier work. His wife Eleanor died of cancer in March 1977. My Way to Ornithology (1991), an account of his early years to 1936, detailed the influences that led to his distinguished career. He died in Bedford, Texas on 11 December 2001.

A Guide to Finding Birds East of the Mississippi, 1951

A Guide to Finding Birds West of the Mississippi, 1953

The obituary in The Auk journal (October 2002) adds to Pettingill's life history: 'Pettingill remarried in 1985 to Josephine Dawson, and in 1987 they moved to Texas to spend their remaining years. His death followed hers by nine days … He is survived by his two children, Polly Pettingill Losito of Auburn, New York, and Mary-Ann Vondra of Euless, Texas, as well as six grandchildren and nine great-grandchildren.'