As a child on Long Island Murphy showed interest in nature and the sea, then went on to study at Brown University in Providence Rhode Island, where he met his future wife Grace Alison Barstow. They had three children. 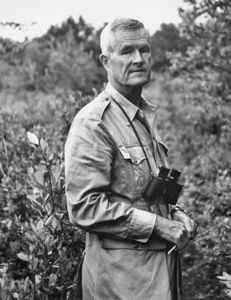 After graduation, Murphy signed on the whaling brig Daisy (Benjamin D Cleveland, master) as assistant navigator. Actually, he was an ornithologist supported jointly by the American Museum of Natural History in New York and the Brooklyn Museum. The Daisy was perhaps the last of the old free-for-all New England sailing vessels, taking whatever whales and seals its crew could find at sea or ashore. It reached South Georgia on 24 November 1912 and worked the Bay of Isles and Possession Bay from 15 December to 14 March 1913.

Murphy had a boat of his own and for most of the time a work tent ashore, but he always returned to the ship at night. He rowed alone to Albatross Island and with sealers to distant beaches, witnessing the indiscriminate and illegal killing of female and young elephant seals. 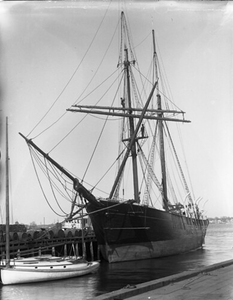 He described the 11 month cruise in Logbook for Grace (1947), dedicated to the newly-wed wife he had left at home, and later published photographs taken during the voyage in A Dead Whale or a Stove Boat (1967).

The field work and collection of sea birds Murphy made during the voyage of the Daisy set his career in the direction it would follow for the rest of his life, firstly at the Brooklyn Museum and then at the American Museum of Natural History. 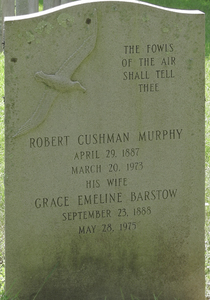 Generous endowments from wealthy business men enabled the AMNH to charter vessels, keep professional collectors like Rollo Beck at sea and buy up the Rothschild and other collections when they came on the market, creating the foremost collection of sea birds in the world.

Murphy's expeditions to the guano islands of Peru and his many publications were crowned by his two volumes of The Oceanic Birds of South America (1936), widely recognised as the founding work of sea bird science. 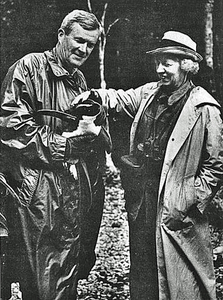 Robert and Grace Murphy with a...

'Murphy remained active and youthful in outlook until the end of his life. When well over 70 he was in the Antarctic on the government icebreaker Glacier at the invitation of the National Science Foundation. Several years later he visited the same area and set foot on South Georgia for the first time in 58 years.  When over 80 he attended the Pacific Science Congress in Australia and travelled the length and breadth of that continent by all means of conveyance. He lectured to the Linnaean Society about the trip about a month before his death and was in his office thereafter. Thus, his sudden death caused as much shock as though he had been decades younger.

Patient, shrewd, humane, Murphy would have made a great judge.'

(from 'The Auk' Quarterly Journal January 1974)

See: The Auk - a quarterly journal of ornithology (obituary January 1974)

See:  For the complete text and illustrations of: Robert Cushman Murphy & Francis Lee Jaques; Oceanic birds of South America : a study of species of the related coasts and seas (pdf file)

Robert Cushman Murphy & Francis Lee Jaques; Oceanic birds of South America : a study of species of the related coasts and seas, including the American quadrant of Antarctica, based upon the Brewster-Sanford collection in the American Museum of Natural History; Macmillan; 1936

Eleanor Matthews; Ambassador to the Penguins: A Naturalist's Year Aboard a Yankee Whaleship, Boston: David R. Godine, 2003  [This book is concerned with Robert Cushman Murphy's journey to South Georgia]