Baha'i and photographer, was born John Alfred Levy on 15 February 1922 in Manhattan, New York, which is also where he grew up. His father was a photographer: his mother thought his studio would be more successful without a Jewish name, so it was changed to Leonard. John graduated from high school at 16 and went to Antioch University as well as one other, but never graduated. He served in the Pacific as a navigator in the US Army Air Corps in World War II and was particularly proud of once navigating successfully by dead reckoning all the way across the Pacific, saving the crew and plane. 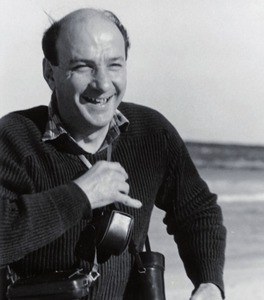 John Leonard once commented that he was upset by the existence of purely 'Negro' units in the air force, which he felt was entirely wrong. Such segregated units, which would have been several hundred strong, were generally allocated menial work and those in the units had little chance of meaningful promotion. After his work as a navigator came to a natural end, John asked if he could be transferred to one of the 'negro' units. This was looked upon as odd but his wish was granted, and he then spent some time with them doing all that he could to represent the African-American personnel and make their lives better.

'He felt so strongly about the injustice of the system that he did his utmost to help those who were victims of it.'

Though his family was Jewish, they were not particularly religious, and he considered himself an agnostic when he took on a commission to write a book on new religions in the United States. The Baha'i Faith attracted him as the most logical of these, and when Baha'i prayer aided him through that greatest of writers' crises - writers' block - he enrolled in the Baha'i Faith in December 1948. It lost him the book commission, but he never regretted his decision.

Leonard attended the 1953 Baha'i International Convention in Chicago and volunteered to move overseas to assist the development of the faith. He rather expected to save up money to move somewhere in Africa, but he seems to have been pleased when the committee overseeing volunteers asked him if he would go to the Falkland Islands. Though the Islands had a bleak reputation, Leonard took the assignment very much to heart, committing his life thereafter to the Falkland Islands through his dedication to the faith.

He arrived on the MV Fitzroy one calm night in February 1954 and had his first roast lunch ashore the next day with the Rev McWHAN and his wife. Within a few days, he managed to rent a room with full board above the Globe Hotel - then, as now, a pub that he recalled as being quiet and sociable. He soon offered to help the lone workman painting the outside of St Mary's - just because it looked as though he needed a hand and Leonard needed something to do. His service got him a recommendation for a job as a painter in the Public Works Department where he worked most of his first year in the Islands. He was especially pleased that first year to have known Dr Richter who carried out the tuberculosis survey, to proofread his report and to help paint the new TB ward, which led to the eradication of TB in the Islands.

Leonard also began his long, occasional association with radio in the Falklands that first year both as a guest on a regular programme introducing newcomers and hosting a series on 'Peoples of the World' which were based on some library research and then finding someone in the Islands who had been to that country who was willing to talk about it on air.

As he settled into Island life, he began to learn more about its problems. Divisions between the social classes at that time were quite strong, and while, as an American, Leonard was invited into the 'expatriate' circle, he endeavoured to maintain contacts with everyone - putting his belief in equality into action as much as he could. He eventually became a long-term supporter of the Working Men's Social Club which was a non-drinking club open to all Islanders (though not, at first, to women). He also became aware of the limited education offered, especially to Camp children who had to rely on travelling teachers. While he had no experience teaching children, he believed so much in education that he decided to give it a try - though it took a couple of applications and an even greater shortage of teachers, before he was offered a job.

Leonard began as a Camp travelling teacher with no training and no real guidance on how to go about the task, except that the books would be there waiting for him to use. When he arrived on the Beaver float plane for his first job, it had been so long since the settlement, Hill Cove, had seen a teacher that the whole population turned out to watch him lose his footing and slip neatly into the water: the only time he provided so much entertainment to so many people. In spite of the inauspicious beginning, his teaching is an abiding fond memory for many of his former pupils whom he really inspired to learn.

After covering just about every teaching 'beat' in the Islands in four years, Leonard returned to Stanley where he first helped an old Camp friend in his peat cutting enterprise for a season before making a start in the photography business. For the next ten years or so, he became the Islands' photographer, taking portraits, passport photos, offering developing services (with the help especially of Walter Felton) and becoming a 'stringer' for Associated Press.

In 1964, Leonard was delighted to receive his first Baha'i visitor, Miss Margaret Mills, and he was even more delighted when she agreed to remain and become his wife. It was a supportive union that sustained them both spiritually. With the help of an additional part-time job, that of town clerk, the couple managed to make ends meet while he continued his photography. When the end of the photography business did come, it was not through insufficient means but the loss of their rented house - when the owner's health required that he retire from Camp life - that forced the change. No other suitable house was available so the business was wound up, and he began a 20-year career with the Falkland Islands Company.

Leonard began as FIC cashier in June 1969, moving to shipping services ten years later where he assisted with cargo shipping and in the travel office with airline ticketing. He had attained an IATA preliminary diploma and was working on an advanced diploma when the 1982 war intervened and FIC's South American associations ceased. He then moved on to the Company's works department, assisting in overseeing the maintenance gang and stevedores, assisting with Island-wide fuel distribution and also working on fire and motor insurance in the Company's insurance agency. He retired with a letter of commendation in 1989.

The FIC job provided the Leonards with a number of benefits including a regular wage and a large tied house which they used for Baha'i activities as the faith grew in the Islands, leading to the formation of the Spiritual Assembly, the governing body of a Baha'i community, in 1972. The job also provided them with paid overseas leave every few years which allowed them to maintain ties with their families in the USA. In 1978 they took an extended leave to travel for the faith in Scandinavia and Scotland, bringing their slide show of the Falklands which stirred great interest.

Though retired, he was still very active up until the last year of his life. In the 1990s, he worked from time to time including stints at Falkland Farmers and Penguin News and as an occasional tour guide. He contributed to tutoring projects for adult literacy, and to the Spiritual Assembly's project of reading Penguin News-To-Tape for the sight-impaired. Sadly, he lost his wife in 1999, but by and large carried on as normal. He continued to enjoy bridge, presenting the occasional 'Classics Hour' on the radio and, amazingly for his age, playing short tennis.

But age did gradually catch up with him; he suffered from increasingly poor circulation and passed away peacefully on 29 April 2006. John Leonard was a strong and respected contributor to the Falklands community who will long be remembered.

"John attended Antioch College -
Antioch University came into existence much later than
when he attended, and it is now separate from Antioch
College, which is located in Yellow Springs, Ohio (USA) on its
original campus."
(information provided by Janet Dodge, a good friend of John and Margaret
Leonard, who attended Antioch College in the 1960's)
Margo Smallwood

A fellow Bahá’í of John Leonard in the Falkland Islands.