biologist South Georgia, was born on 12 June 1901 in Clifton, Bristol the eldest child of Harold Matthews, and Sarah (Ruby), née Harrison, both of whom were pharmacists.

He was educated at Bristol Grammar School and then King's College Cambridge. In 1924 on returning from the Cambridge University Expedition to Río de Janeiro, he married Helene Dorothy (Dolly) Harris. They had two children, Jean and John . 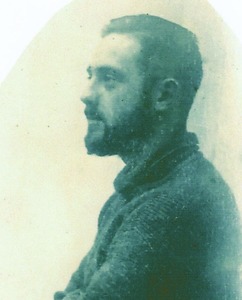 In 1924 Matthews, usually known as Leo or sometimes Matt, joined the Discovery Investigations and helped to create the shore station 'Discovery House' at Grytviken, South Georgia. The Discovery Investigations were set up by the Colonial Office to run a series of cruises and shore-based investigations in to the biology of whales in the southern Ocean that would provide data for the management of the whaling industry. To do this Matthews spent time collecting statistics on the whales brought into the whaling station at Grytviken and going with the whalers in search of whales and elephant seals which were hunted for their blubber. He had a good rapport with the men themselves and shared their harsh and uncomfortable living and working conditions.

He made many observations in the field on elephant seals, albatross and penguins and describes going among their colonies. Matthews collected scientific data on their behaviour, anatomy and physiology. He also collected tales from the whalers themselves and had many yarns to tell. This enabled him to write his later popular books, Wandering Albatross and Sea Elephant. 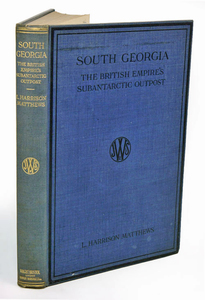 On his return to Bristol he spent a number of years writing up and publishing papers for the Discovery Reports including three major monographs on the Humpback, Sei and Sperm whales. He also wrote South Georgia, the British Empire's Sub-Antarctic Outpost, a history of the Island and its ecology.

From 1931 to 1933 he joined his brother Bryan, later Sir Bryan Matthews, in developing the oscillograph and electrocardiograph. During World War II he worked on radar for the Telecommunications Research Establishment and then with the RAF at Stradishall in Suffolk. After the War Office had recruited all the physicists for research, they employed biologists who had knowledge of physics. 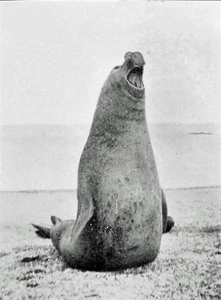 Photograph taken by Leo Matthews of...

He returned to Bristol in 1945 as Research Fellow at the University. Matthews became scientific director of the Zoological Society of London in 1951 where he remained until his retirement to Suffolk in 1966.

During his years in London he served on the council of the Ray Society, was president, section D of the British Association for the Advancement of Science (1959), the Association of British Zoologists (1960) the British Academy of Forensic Science and the Ray Society (1965). He was chairman, World List of Scientific Periodicals (1959-66) and of the Seals sub-committee of the Natural Environment Research Council (1967-71). 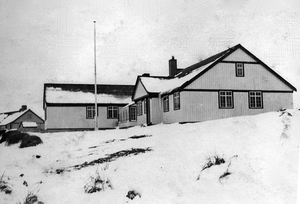 His field of research ranged from tiny pelagic crustaceans to great whales, and this took him from the Antarctic to the Arctic via South America, Africa and Europe. In Tanganyika, now Tanzania, he studied hyenas. He also studied bats and basking sharks; indeed his inquisitive nature led him to study a wide variety of animal species, especially their anatomy.

He wrote many popular books on whales, British mammals and other subjects, often illustrated with his own photographs and drawings. All his books and scientific papers were written as L. Harrison Matthews. 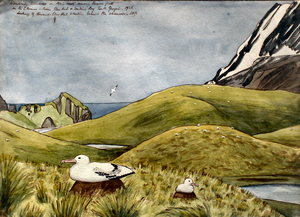 Painting of a Wandering albatross by...

He was involved in the founding of the Mammal Society, being chairman at its first gathering in 1955.

He attended Discovery dinners and those of the Antarctic Club of which he was President in 1986. In 1939 he was awarded his Cambridge ScD and was elected a fellow of the Royal Society in 1954. Matthews was awarded the Zoological Society of London's Silver Medal in 1985.

Matthews was profoundly influenced by his time spent in the Antarctic. He had many tales to tell and was able to entertain his friends, and of course, his family over the dinner table after long-lasting meals. 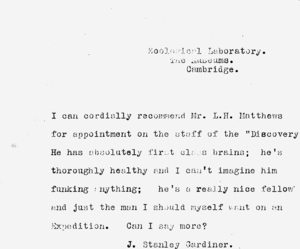 In retirement he renovated the Old Rectory making it his family home where he spent many happy hours growing fruit and vegetables and developing his three and a half acres.

After a series of strokes Leo Matthews died in November 1986.

Editorial comment:  From an obituary for Matthews - published by the Royal Society: 'Known to many as ‘Leo’, and to others as the intrepid explorer ‘El-Aitch-Em’, he had earlier in his career been nicknamed ‘Matt’, and then ‘Hyaena’ Matthews. He was the last of the great travelling naturalists of his day having visited South America, the Falklands and South Georgia, the Antarctic and the Arctic, Europe and Africa to observe and dissect animals varying in size and diversity from copepods to whales. His extensive knowledge of animals and their habits was incorporated in a long series of research papers and popular books that have already become valued collectors’ items.

He was never better than at meetings at the London Zoo when talking on animals newly introduced to the Collections or fostering discussion on papers read to the Zoological Society. No laboratory experimentalist, he frequently claimed that the animals themselves performed naturally all the experiments that he would wish to conduct. When in detective mode, and wearing his cape and carrying a swordstick, he always seemed to the writer an incarnation of Chesterton’s The man who was Thursday.' 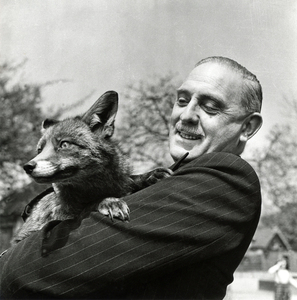 L. Harrison Matthews; The Natural History of the Whale. Weidenfeld and Nicolson: London. 1978