conservationist and artist, was born on 14 September 1909 in London, only child of the explorer Robert Falcon Scott and the sculptress Kathleen Bruce.

Peter Scott never knew his father who died in Antarctica in March 1912 and who wrote in his last letter to his wife: 'make the boy interested in natural history if you can. It is better than games'. A request that was to be amply fulfilled in his son's life. Educated at West Down preparatory school and Oundle, he initially studied natural science at Cambridge but switched to history of art and architecture in his final year. He studied animal painting at the Munich State Academy and in 1933 enrolled at the Royal Academy Schools in London. 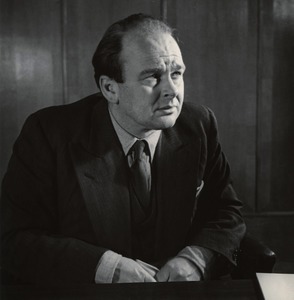 In yachting, he won an Olympic bronze medal in 1936. In 1940 he joined the Royal Navy Volunteer Reserve as a sub-lieutenant, ending the war as a lieutenant-commander, having earned two DSC's and being mentioned three times in despatches. After the war he continued his yachting, skippering Sovereign in the America's Cup in 1964. In addition, he developed an interest in gliding, becoming British champion in 1963.

But his real passion, in line with his father's wish, was 'natural history'. While at Cambridge he had developed an interest in wildfowling which developed into his lifelong interest in birds, and particularly ducks and geese. In 1948 Scott established the Severn Wildfowl Trust at Slimbridge in Gloucestershire and in the 1950s became a leading figure in the new international movement for environmental conservation. 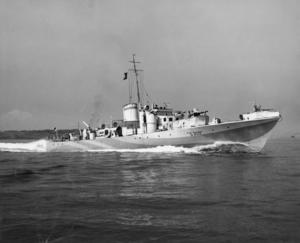 Steam Gunboat S309 under the command...

He helped establish the Species Survival Commission (SSC) of the International Union for Conservation of Nature (IUCN) and invented the system of Red Data Books listing endangered species throughout the world.

He also founded the World Wildlife Fund, now the World Wide Fund for Nature (WWF) the world's foremost international conservation organisation, and designed its panda logo. In 1959 he helped establish the Charles Darwin Foundation to conserve the Galapagos Islands. 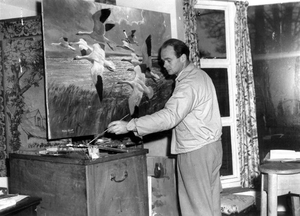 In 1966 Scott visited Antarctica, and was one of the first to appreciate its wildlife and the threats facing it. He revisited the southern continent several times as it became gradually more accessible, being a strong supporter of environmentally oriented tourism as a means of protecting wilderness areas.

In 1979 he visited the Falkland Islands and met a number of other conservationists on New Island where they agreed on the need for a new organisation to help protect the natural and cultural heritage of the Islands. This resulted in the establishment later that year of the Falkland Islands Foundation for Wildlife, Wrecks and Places of Historic Interest, (now Falklands Conservation) and he served as its first Chairman. Falklands Conservation has since grown into a very effective and respected organisation. It has had a significant and beneficial impact on the Falklands ecosystem, helping Islanders to appreciate their environment and natural history more fully, and making the Falklands a much respected example of sustainable development. 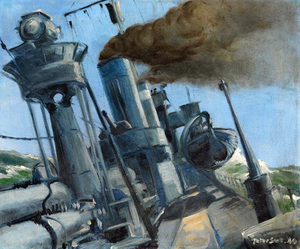 Scott's painting of HMS Broke; he was...

In addition to his work as a conservationist he was an accomplished broadcaster, author and illustrator. He wrote 18 books, including his autobiography Eye of the Wind, and illustrated 20 others. His paintings sold easily and are now much sought after.

He was married twice and had two daughters: Nicola with his first wife, the novelist, Elizabeth Jane Howard, and Dafila with his second wife, Philippa Talbot-Ponsonby. He also had a son, Richard Falcon, with Philippa.

A truly remarkable man; and while the Falklands were just a small part of his life, his legacy to the Islands is considerable as the achievements of Falklands Conservation demonstrate.In 1933, a friend wrote 'Oh dear Peter, have you ever realised how much you walk in the sun'.

The son of a national hero and a talented and unusual mother, Peter Scott certainly did 'walk in the sun', achieving so much in so many fields. He was yachtsman, naval commander, glider pilot, artist, skater, author, but his lasting legacy is, as his father had wished, to natural history and to the preservation of our environment. He was one of the individuals who did most for the conservation of the planet during the twentieth century, not only walking in the sun, but passing it on to others.

Writer and conservationist with specific interests in Falklands, Galapagos and New Zealand.