sealer and writer, appears to have been born in Lewisham, near London, about 1801. The early death of his father and problems with his widowed mother's family resulted in his running away and adoption by a band of gypsies. Next, as a ships' boy, he went to sea and remained a sailor for the rest of his life. His vessel became involved in the Napoleonic Wars and, after being captured and recaptured, he ended up aboard Hindoustan with the Royal Navy in which he describes much action during the Peninsular War (1812-1815). But he deserted in Portsmouth, went to London, and joined Norfolk on a sealing voyage to South Georgia in 1815. 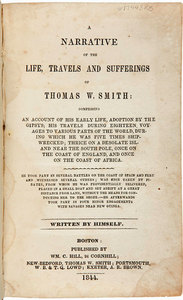 At the beginning of this voyage he wrote:

Until now, I, and many of the boys had been in total ignorance with regard to the ship's port of destination or the nature of her voyage. Some of us had still cherished the idea that the ship was bound to the coast of Africa, and this was strengthened by listening to the frequent conversation which the men held about killing huge elephants with lances and shooting them.

On arrival at South Georgia he describes many bays and anchorages several of which may be identified from Captain COOK's place-names, but a few are difficult to determine. His account of the island is good and includes descriptions of the glaciers, mountainous terrain, and severe weather. 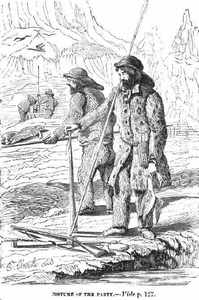 Details of the Elephant Seal industry are excellent, especially the calendar, which begins after winter with the 'Pupping-Cow Season' in October, the 'Brown-Cow Season' follows, then the 'Young-Bull Season', and the 'March Bull Season'. Smith notes 'the season for seal commences in December and lasts through the three winter [sic] months'. Construction of shallops and the difficulties of their deployment in smaller bays and transport of blubber to the ship are described. Norfolk wintered in South Georgia for 1816. At last a full cargo was obtained and Norfolk departed for London in December 1816 with 3500 barrels of Elephant Seal oil and 5000 Fur Seal skins. Smith commented: 'I suffered much with the severity of the cold, which affected my feet to a great degree. I had neither shoes nor stockings having previously worn them out'.

Admiral Colpoys was his next sealer, aboard which Smith began a voyage to South Georgia in May 1817 as an apprentice, but was wrecked there in November, with almost a full cargo of Elephant Seal oil aboard. He, and the rest of the crew were taken back to London by a ship belonging to the same owners in early 1818. 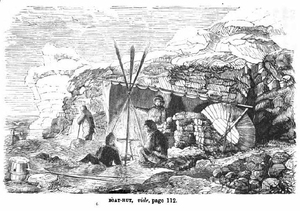 After a refit Norfolk, accompanied by a schooner Ann, sailed again in June 1818 with Smith aboard as a seaman. The events of this voyage involved his survival from the wreck of a sloop, probably at Cooper Bay in South Georgia. Sealing has become, by this time, less profitable in South Georgia, so an exploratory voyage to the South Sandwich Islands was made in the 1818-19 summer. Smith's description is brief, but notes one of the volcanic peaks - 'one of nature's lighthouses, planted in the midst of a distant ocean by that unseen hand, to serve as a beacon to the fearless mariner'. No seals were found so the islands were of no interest to the captain and after three days Norfolk returned to South Georgia. Here a replacement shallop was purchased and Smith was aboard her working in the Bay of Islands when he suffered another wreck 'which so affected the Captain that he was near to putting an end to his existence'. Smith then spent the 1819 winter on South Georgia. Bad luck continued for, after an unsuccessful voyage, he was back in London to find the ship and cargo in the hands of creditors. Circumstances were such that he wrote: 'I was under the necessity of pledging my clothes from time to time to procure food'.

Despite these unfortunate vicissitudes Smith was now an experienced Antarctic sealer and went aboard Hetty accompanied by Sprightly. In 1819 the South Shetland Islands had been discovered and a major 'seal rush' began as they abounded with highly profitable Fur Seals. The vessels first visited the Falkland Islands for a fortnight to take water and shoot geese, pigs, and cattle. Smith commented: 'These islands are worthy of cultivation, as they possess good, rich, and extensive tracts of land'.

On arrival at the South Shetland Islands problems of finding suitable landings and opposition from other sealing gangs arose. Nevertheless their efforts were 'crowned with abundant success, by the discovery of several beaches along the coast, which were thronged with these animals [Fur Seals] in every direction'. Smith's account describes conflicts between different sealing gangs, with British and American sealers fighting at Robbery Beaches on Livingston Island. His near drowning and the effects of seal bites did not dampen his enthusiasm for this voyage which obtained a full cargo and should have been very profitable. Sadly on return to London in 1821, he found the seal pelt market glutted and, for himself and the crew 'the amount of their wages reduced to a mere trifle'.

That was the last of his sealing voyages but he then joined the somewhat similar whaling trade working first in the Pacific Ocean, becoming involved in the wars of independence of Chile and Peru. His first voyage was very profitable, but he was relieved of his earnings by a thief in London. Subsequent voyages were to New Zealand, just in time to become involved with the Maori Wars of which he gives good descriptions. More whaling voyages took him to many Pacific islands and the coasts of Africa from where he 'washed up' in the Massachusetts whaling port of New Bedford, after a serious chest injury from being crushed by an oil barrel.

Weakened by these events, Smith took employment ashore. After two years in New Bedford he attended lectures by a preacher 'which labor eventually resulted in the conversion of my heart to God.' Thus he came to join the Christian Labor Academy but, for financial reasons, was unable to continue there. His autobiography ends around 1838, reporting increasing debility, probably tuberculosis. This book has a very long title:

A Narrative of the Life Travels and Sufferings of Thomas W. Smith comprising an account of his Early Life, Adoption by the Gipsys; his Travels During Eighteen Voyages to various parts of the World, During which he was five time Shipwrecked; thrice on a Desolate Island near the South Pole, once on the coast of England and once on the coast of Africa. He took part in several Battles on the coast of Spain and Peru and witnessed several others; was once taken by Pirates, from whom he was Providentially Delivered and placed in a small boat and set adrift at a great distance from land, without the means for conducting her to the shore, he afterwards took part in Four Minor Engagements with Savages near New Guinea.

It was published in Boston, Mass, in 1844, probably posthumously. His origin and early life are described but there are discrepancies: some perhaps from failings of memory, but after a highly adventurous life, Smith may have had other reasons for not being entirely open. His adventures tally well with historical facts. Thomas W Smith was one of the very few literate 'below decks' men from the sealing period of Antarctic history. His fascinating autobiography is one of the earliest accounts of the Dependencies of the Falkland Islands and a very good source for the sealing industry.