Norwegian gunner and whaling manager, was born in Tjølling, now part of Larvik, in Norway on 17 February 1875.

Like many young boys at the time he went to sea at only 15 years of age - first on board Hvide Stjerne, catching bottlenose whales in the Arctic Sea, then for one and a half years on the merchant ship Aviemore. In 1892 he signed on the sealer Jason as harpooner searching for whales in Antarctic waters under the command of CA LARSEN. 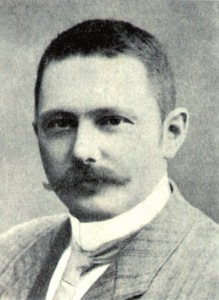 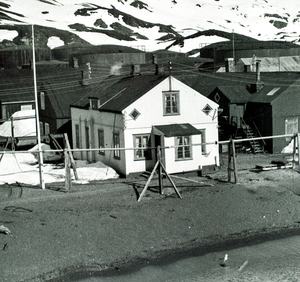 When the floating factory Fridtjof Nansen (I) owned by A/S Sandefjords Hvalfangerselskab in the autumn of 1906 set off for the South Georgia whaling ground, Sørlle accompanied the expedition as gunner on board Suderø, one of the two catchers. Before whaling started however the floating factory foundered just off South Georgia on what is now called the Fridtjof Nansen Bank. In the chaos following the shipwreck, Sørlle saved several crewmen from certain death. (Over the years he saved 37 lives and was awarded the Norwegian lifesaving medal).

In the 1907/8 whaling season Sørlle once again was gunner on board Suderø when the new mother ship Fridtjof Nansen (II) began operations from Stromness Harbour at South Georgia.

In the 1908/9 and 1909/10 seasons he was whale gunner on board Samson, another of the mother ship's catchers working the South Georgia ground.

In addition to being an excellent gunner, Sørlle proved he had good leadership ability and this was noticed by the managing director of A/S Sandefjords Hvalfangerselskab, Peder Bogen.

In 1910 he was appointed manager on board the floating factory Svend Foyn owned by A/S Sydhavet, another company managed by Bogen which operated at the South Shetlands whaling ground. After two seasons as manager on Svend Foyn, Sørlle was called back to A/S Sandefjords Hvalfangerselskab and given the important mission of building the company's shore station at Stromness Harbour while at the same time he was to manage whaling operations. 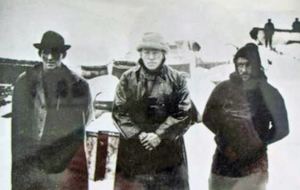 Shackleton, Crean and Vincent at...

He was manager at Stromness Harbour for all seasons from 1912 until 1931, except for the 1917/18 season when he was manager on Svend Foyn I at the South Shetlands and the 1918/19 season, which he spent in the company's offices in Sandefjord.

On 20 May 1916, he welcomed Ernest SHACKLETON, Frank Worsley and Tom Crean back to civilisation after their epic journey from Elephant Island. 'Who the hell are you?' he at first asked the dirty and exhausted arrivals, but then, recognising Shackleton, offered boundless hospitality. 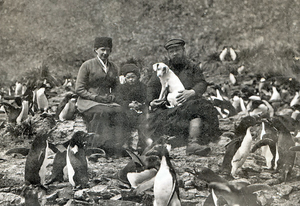 Thoralf Sorlle with his wife and...

Under Sørlle's management, Stromness Harbour enjoyed continuous development, especially in the 1920s. In 1931 when the station was closed down following the owners' decision to go pelagic with their new floating factory Vestfold, Stromness was a top rate modern operational station.

With acute powers of observation and a gift for balancing the demands of owners and labourers, Sørlle made Stromness Harbour a peaceful place compared to the other stations at South Georgia during the troubled years after World War I. His decisions favouring the labour force were not always applauded by the managers of A/S Sandefjords Hvalfangerselskab (from 1920 A/S Vestfold after a merger with Hvalfangerselskabet 'Ocean' A/S), but they were always accepted. 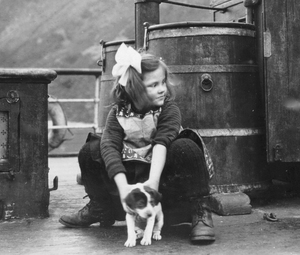 After the station was closed down in 1931, Sørlle went back to Norway and Sandefjord for good.

He died on 25 May 1939 after a stroke and is buried at Ekeberg churchyard in Sandefjord.

Sørlle had four daughters: Ragnhild, Aase, Anne Marie who died of Spanish flu in 1918, and Ingeborg Margrethe (nicknamed ‘Lillen’ meaning ‘Little one’). They visited South Georgia with their mother.

Editorial comment: :Sørlle's daughter Lillen went to South Georgia four times and in 1927 was known as the 'Queen of Stromness' and was spoiled by all the men.