whaling captain, was the son and last of the seven surviving children of the renowned Antarctic whaler and polar explorer Captain Carl Anton LARSEN. In January 1906, as a babe in arms, he arrived at South Georgia with the remainder of the Larsen family, and was, therefore, at that that time, probably the youngest person ever to set foot on the Island, before the first child was born there in 1913. Thorbjørn Larsen was born in Christiania (Oslo), Norway on Christmas Day 1904 to Captain CA Larsen and his wife Andrine née Thorsen. He spent some of his formative years in Norway and travelling to South Georgia where, with the support of his father, he began to learn some of the skills of managing sea craft and watching large whales being hauled up and dismembered on the Grytviken whaling station plan. 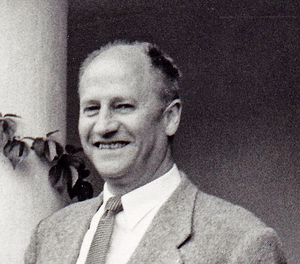 After a period in boarding school, Thorbjørn attended the Oslo Commercial College, and on graduating in 1923 he was employed by Eilert Sundt & Company, ship brokers and chandlers who had businesses in Oslo and the Rio de la Plata. The following year, however, the opportunity to join his father on a pioneering whaling expedition to the Ross Sea on the factory ship Sir James Clark Ross was too great. This was the turning point in his life, because on 8 December 1924 while in the ice, his father, weary from over thirty years of seeking out whales in the Southern Ocean died from heart failure, with Thorbjørn at his side.

Thorbjørn Larsen considered emigrating to New Zealand, but in 1925 he was back in Oslo working as an accountant/bookkeeper for an insurance company ‘Norske Atlas’. But the call of the sea was too great and in 1926 he joined the whale catcher Star I as an able seaman for his father’s old company Rosshavet under the famous gunner/captain Aksel Akselsen. He remained with Rosshavet for three seasons, spending the austral winters in New Zealand where Rosshavet had established a small shipyard for repair and maintenance of the catching fleet. 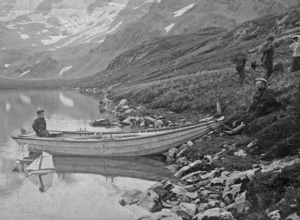 Returning to Oslo in 1930, he married his childhood sweetheart Hjørdis Skibsrud, five days his junior, who had been employed in France as a governess to a banking family. Two years later, on 30 June 1932, Larsen received his master’s certificate, and his first child, a son Bjørn Tore was born. In April 1934 he started a small shipping company, but the 1930s were not a good time to trade and in 1935 he sailed southwards again for his first season as captain/gunner on board Rosshavet’s Star 17. For the remainder of the 1930s he found lucrative employment as a gunner on many different companies’ whaling vessels, and in April 1940 he signed off in Cape Town from his last pre-war assignment on Irvin & Johnson’s Odberg working with the South African factory ship Tafelberg in the Southern Ocean.

Because of the German invasion of Norway in April 1940, he was unable to return home and found himself at Halifax, Nova Scotia. In October 1940 he signed on as the master of a small tanker Sigrid and joined the convoys crossing the Atlantic with oil for the war effort, but in November 1940 he was appointed as Superintendent Captain for the Norwegian Shipping and Trade Mission (Notraship)at their Hull branch office. In 1944 he was attached to the Operations Pool in Southampton as liaison officer and Nortraship’s representative for about three months during the allied invasion of Europe. But the war left him distraught after many lost lives and broken families and what he considered was the shameful failure of the authorities to adequately compensate those who had been affected. On his return to Norway, he refused to accept his war service medals.

After the war, Thorbjørn and his wife and two children returned to their old home in Oslo, but after six weeks he was back at sea again, this time as gunner on a whaling expedition with Bruun and von der Lippe’s factory ship Antarctic, formerly Rosshavet’s C. A. Larsen. The relationship with Bruun became a fruitful one and in 1950 he was appointed the expedition manager and leader. In between whaling seasons, he pursued other opportunities. In the summer of 1949, he was commissioned by the Norges Rederiforbund (Norwegian Shipowners Association) and the whaling magnate Anders Jahre to supervise the building in Japan of several whale catchers for Norwegian owners. As a bonus his wife joined him for the whole period, while his daughter Brit (b 1938) was cared for by an aunt and his son sent to a boarding school in England. On his return he was appointed a member of the Hvalrådet (Whaling Council) and became a representativeof the whale gunner’s association.

The successful completion of his assignment in Japan led to a long and rewarding association with Anders Jahre and his Kosmos company. In 1952/53 he joined Jahre’s Kos 42 for the first of many whaling expeditions to the Southern Ocean. The following season he was aboard the Kos 47 which had been purchased by Jahre whilst fitting out at Smith’s Dock, Middlesbrough, for Alfredo RYAN’s failed Juan Peron expedition. In between seasons he gained employment as a stand-in master on Jahre’s tanker fleet. When, in 1959, he learnt from Bror von der Lippe that A/S Tønsbergs Hvalfangeri were going to close (permanently as it transpired) their Husvik Harbour whaling station on South Georgia at the end of the season, he took advantage of the opportunity to secure the gunner’s position on their Busen 4 and to make a nostalgic visit to South Georgia, the island of his childhood for the last time. 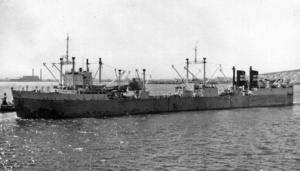 Thorbjørn Larsen’s final whaling expeditions to the Southern Ocean took place in 1960-62 as master and expedition manager of Jahre’s large factory ship Kosmos IV. After that he was appointed Jahre’s ‘flag-captain’ on Jahre’s large tankers Jakinda and Jagranda. On this last assignment, his wife joined him. He had been ill for some time with cancer but had refused to accept it.

This biography has been written with the consent of Captain Thorbjørn Larsen’s son Bjørn Tore Larsen and Captain C A Larsen’s great grand-daughter Eva Marie Widmark.