ship's captain, was born in Bath, Somerset on 15 January 1929, the son of Thomas Harry Warne and his wife Annie Edith, née Jordan.

He was educated at the City of Bath Boys' School and the School of Navigation at Southampton. In 1946 he became an indentured apprentice to the South American Saint Line and served with them until 1950. It was during this time that he first made the acquaintance of Falkland Islanders and became aware of the dispute with Argentina. The daughter of a family he stayed with in Buenos Aires went to the English school and was taught, in the morning sessions in English, that the Islands were British, while in the afternoon sessions in Spanish, she learnt that the Malvinas were Argentine! 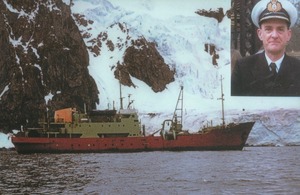 356 RRS Shackleton and her Captain.

In 1971 Furness withdrew from the west coast service, and Warne joined the Natural Environment Research Council (NERC) as third officer on the RRS Discovery. In 1973-4 he made his first cruise to the Antarctic and first visit to the Falkland Islands as chief officer on the RRS Shackleton. 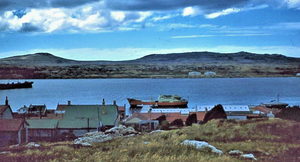 RRS Shackleton at Public Jetty in...

It was on 4 February 1975, when he was in command of RRS Shackleton 87 miles from Stanley that he was intercepted by an Argentine destroyer, the Almirante Storni, and told to sail to Ushuaia in Tierra del Fuego. Warne refused to change course and contacted Governor FRENCH by radio. He told the Argentine ship that she might accompany him to Stanley, but the Argentine captain refused and fired three shots across Shackleton's bows. Warne warned the Argentines that he was carrying explosives and continued on course for Stanley. After firing twice more, the destroyer gave up but kept close to the Shackleton until the Falklands were in sight. The incident marked a sharp increase in Argentine pressure on the Islands but Warne's coolness, ably supported by all on board, had saved the day. He was awarded an OBE in the next New Year's Honours.

In 1986-1989 he was in command of the RRS Charles Darwin for part of her west to east circumnavigation.

He retired from NERC in 1989 and studied at the Open University, obtaining a BSc (Hons) in earth sciences and oceanography.

Philip Warne and his wife also acted as long and short term foster parents to 25 Newcastle teenagers over 15 years - a task he describes as just as challenging as quarrelling with an Argentine destroyer! 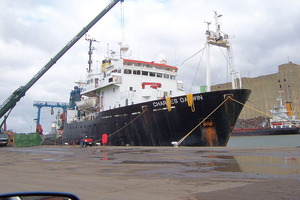