missionary, was born in Connecticut, USA in February 1801.

He spent some years as a teacher, then studied theology and graduated in 1833. He was invited by the Boston Board of Missions to lead an exploratory voyage to Patagonia to see if a mission could be established among the Indians there. 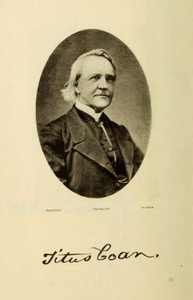 With the Reverend Mr Arms, Coan sailed from New York for the Straits of Magellan in August 1833 in the sealing schooner Mary Jane under Captain William Clift, reaching their destination after an arduous voyage lasting 88 days.

The two men set up their Tent Tabernacle on the shore of the Magellan Straits on 16 November 1833 with few belongings (two saddles, a small medicine chest, some food, fishing tackle and clothes) which attracted the close interest of the natives. 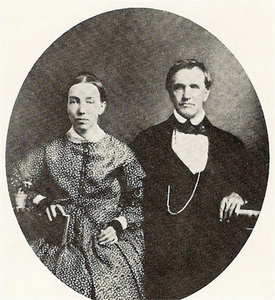 In January 1834, Coan and Arms decided they had had sufficient experience of primitive savages and were pleased to spot a sail in the Straits. They met the schooner Antarctic of 173 tons from New York whose master, James Nash, offered to take them on board. They sailed from the Strait of Magellan on 26 January with the idea of taking stores in the Falkland Islands before finding another vessel to take them north and home. As they headed east out of the Strait, they passed a brig with the appearance of a man-of-war: it was HMS Beagle with Charles DARWIN aboard.

Antarctic dropped anchor on 28 January in a quiet West Falkland bay and found the schooner Caroline, also of New York, anchored nearby. A visit ashore for game was rewarded in a short time with 30 geese and ducks. The following day, a call was made first to Albemarle Harbour and then to another small island for some sealing among a sea lion colony. At daylight on 30 January, they proceeded up Falkland Sound passing two more vessels and anchoring at Salvador at 4pm. Landing in search of more game, they were greeted on the beach by a large sea elephant which was killed for its three barrels of oil. 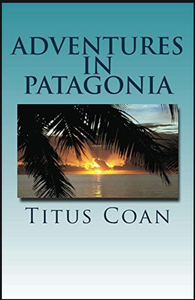 On 1 February 1834, three men appeared on horseback on Salvador beach opposite the ship. The captain sent his boat ashore to communicate and established they were mestizos* and Indians from Buenos Aires who lived in Port Louis but roamed the island slaughtering wild cattle and other game. Coan records: 'they are called gauchos; we hear that there has been a massacre in Port Louis of late'. The gauchos offered seven fat bullocks at US$ 5 per head and accepted payment in powder, balls, tobacco and rum. The next day, the ship's boat went on to another secluded bay and found seven armed Spaniards and Indians described as 'wild and suspicious' who were presumed to have been involved in the massacre the previous August. On 3 February, six more men appeared on the shore nearby armed with double-barrelled guns, pistols, dirks and knives and led by a Spaniard known as Captain Antook (Diego Antonio RIVERO) and payment was made for the bullocks.

Next morning, a boat was sent to Rincon Grande beach and contact made with an Englishman and an Indian sent by the officer in charge, Lieutenant SMITH, to enquire about the vessel. In the afternoon, the Englishman came aboard with a letter from Smith to Captain Nash containing details of the massacre. On 5 February, Smith came personally: he strongly disapproved of the trading between Nash and the assumed perpetrators of the massacre. He said that he viewed it as an act of hostility against His Majesty's Government and would have seized the Antarctic if he had the means to do so. 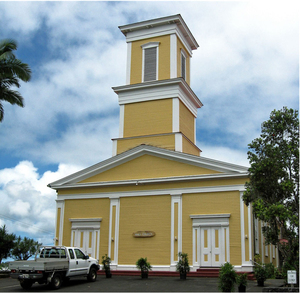 After this unpromising start, relationships calmed down and Coan and Arms were invited to visit Port Louis, four and a quarter hour's walk away. Smith's house consisted of one room containing an old Franklin stove*, a table, an old sideboard, a dingy sofa, a chest of drawers, a crib and a few chairs: it was the room in which Matthew BRISBANE had been murdered. Coan and Arms spent a pleasant evening in conversation with Smith and returned to the ship at Salvador the next morning.

In all, Titus Coan spent 40 days travelling throughout the Falklands observing and recording the terrain, the wildlife and the men of many nations that he encountered. He left on board the schooner Talma on 9 March 1834, arrived at New London on 7 May and subsequently reported to the Board that had sent him that it was not currently possible to establish a Mission in Patagonia. 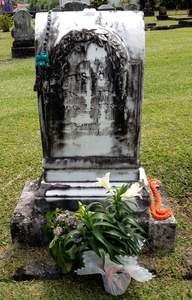 That November, Coan married Fidelia Church and a month later they sailed as missionaries to the island of Hilo in Hawaii where Coan made a great impact.

He became a powerful speaker in the local language and his energy, affectionate nature and charming personal presence brought great success. He is reported to have brought a total of 13,000 people into his Hilo church, the largest single congregation in the world. Much of this change in fortunes was clearly due to the wise aid and counsel of Mrs Coan, described as a woman of fine mind and great charm. She died in Hilo in September 1872 but Coan himself survived for another ten years. In 1880, Coan published his book Adventure in Patagonia which includes a description of the months he spent with the Indians and of his time in the Falklands.

See:  Titus Coan - a memorial  (held in the Library of Congress)