Johann Reinhold Forster was born on 22 October 1729 at Dirschau, Polish Prussia {Tczew, Poland}, the only child of the marriage of Georg Reinhold Forster and the widow Eva Platt in 1727. In 1745-48 Johann Reinhold attended the Joachimsthal-Gymnasium, and from 1748 to 1751 the Friedrichs University, Berlin, where he studied mostly theology. On 26 February 1754 Forster married his cousin Justina Elisabeth née Nicolai (b 15 August 1726), daughter of Carl Benjamin and Susanna Nicolai. Their son George, christened Johann George Adam, was the oldest of seven surviving children (one child died at birth). George, known as Georg in German literature, was born on 26 November 1754 at the rectory in Nassenhuben, where Johann Reinhold was a pastor for almost 12 years. Johann Reinhold found pastoral work at the Nassenhuben rectory stifling and, after a journey to Russia (March 1765 to August 1766) by invitation, he moved to England, taking George with him. Johann Reinhold tutored in modern languages and natural history at the Warrington Academy in Lancashire from 1767 to 1769. His wife and other six children joined him in September 1767. 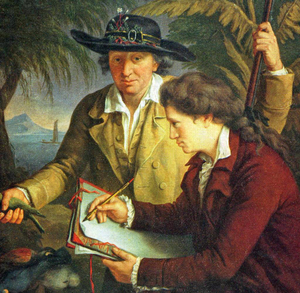 Johann Reinhold Forster was 42 when he joined the Resolution as principal naturalist on Captain James COOK's second voyage to the Pacific, 1772-75. His 17 year old son George Forster and the botanist Anders Sparrman (1748-1820) accompanied him as scientific assistants, with a servant. The expedition's second ship the Adventure, captained by Tobias Furneaux, was separated from the Resolution in late 1773 and returned to England independently in July 1774, a year before the return of the Resolution.

Father and son were accomplished writers and natural philosophers with many skills. Neither enjoyed an untroubled life. Johann Reinhold, a member of the Royal Academy of Madrid and the Society for Promoting Natural Knowledge, Berlin, and Fellow of the Royal Society (elected 27 February 1772), quarrelled with the Admiralty over the publication of his account of the Resolution's voyage. Forster published this under his son's name with the title A voyage round the world in His Britannic Majesty's sloop Resolution. In it, George noted that his father was on the Resolution 'to extend his observations to every remarkable object'.

The Resolution rounded Cape Horn on 29 December 1774. The ship sighted what is now known as South Georgia on 14 January 1775. Details of the first recorded landings on the 'Isle of Georgia' are scant, but both father and son were probably in the boat party which accompanied Cook on the first landings there, at Possession Bay on 17 January 1775. As the Forsters' published account states, and as is generally accepted, the name given to the island by Cook was suggested by Johann Reinhold as 'Southern Georgia':

As it had been the main object of our voyage to explore the high southern latitudes, my father suggested to Captain Cook, that it would be proper to name this land after the monarch who had set on foot our expedition, solely for the improvement of science, and whose name ought therefore to be celebrated in both hemispheres,

[Horace: 'A part of this world will bear your name.']

It was accordingly honoured with the name of Southern Georgia, which will give it importance, and continue to spread a degree of lustre over it, which it cannot derive from its barrenness and its dreary appearance.

The Resolution sailed southeast from South Georgia to Clerke ('Clerke's') Rocks (22 January 1775) and stood off from them in heavy fog.

On 31 January 1775 the Resolution, approaching from the south, sighted the previously unknown island arc now known as the South Sandwich Islands at 59°30'S, 27°30'W. As with South Georgia, both Cook and Johann Reinhold Forster record giving the name of Southern Thule to the first land sighted - a mountainous, rocky, snowy island with steep inaccessible coasts. Cape Montagu and Saunders Island ('Saunder's Isle'), 57°48'S, 26°35'W were sighted next day, 1 February, and two smaller islands (the Candlemas Islands) the following day.

The whole country had the most desolate and horrid appearance which can possibly be conceived; not a single grass could be discerned upon it, and it seemed to be forsaken even by the amphibious and lumpish animals which dwelt on Southern Georgia.

Cook named the islands Sandwich Land after the first lord of the Admiralty. The remoteness and barrenness of the land, and the ship's shortness of provisions, led him to abandon Antarctic investigations in March and sail east and then northward in the Resolution.

George Forster, also a fellow of the Royal Society (elected 9 January 1777), published his own record of the voyage as Observations made during a voyage round the world. In the absence of any commercial interest in South Georgia, he concluded:

It should therefore seem probable, that though Southern Georgia may hereafter become important to mankind, that period is at present so far remote, and perhaps will not happen, till Patagonia and Tierra del Fuego are inhabited, and civilized like Scotland and Sweden.

George Forster married Therese Heyne (1764-1829), daughter of Christian Gottlieb Heyne, in 1785. The couple had two surviving daughters Therese (1786-1862) and Klara (1789-1823), and a daughter Louisa and son George who died as infants. The marriage eventually failed to prosper, and Therese later remarried. After appointments to the chair of natural history at the University of Vilna {Vilnius} and as librarian at the University of Mainz, he espoused the revolutionary cause when Mainz was occupied by the French in October 1792 and was elected to the National Assembly in Paris. He died there on 10 January 1794 at the age of 39, probably of pneumonia, and was buried in an unmarked grave in Père Lachaise cemetery.

George predeceased his father by almost five years. Johann Reinhold Forster was appointed a professor of natural history, mineralogy and medicine at the University of Halle, Germany, in November 1779. He was awarded a Doctor of Civil Laws (Oxford University). He died of heart disease in Halle at the age of 69 on 9 December 1798, and was buried in the municipal graveyard. His wife Justina was buried in the same plot on 10 December 1804, and their daughter Justine in 1826. Johann Reinhold left a valuable library and herbarium; his wife was the sole beneficiary of his will.

Vilification of Forster by William Wales seems to have been largely responsible for the picture which has prevailed of Johann Reinhold as a disagreeable man of perhaps scientifically dubious worth. Though he was far from adept at smooth social intercourse or at self-promotion, Johann Reinhold Forster (like his son) was a remarkable and erudite scholar and natural historian, and - in the words of his biographer Michael Hoare - 'the first government-paid scientist in the British service'. He made the earliest scientific observations of the South Georgia and South Sandwich region, collected and named species of penguin and petrel including the king penguin, and drew or oversaw the drawing of more than 500 plants and 300 animals. He wrote fundamental works on albatrosses and petrels. His books, catalogues and published letters show the extent of his contribution to zoological, botanical, geographical, historical and philological knowledge in eighteenth century Europe.

Johann Reinhold is commemorated by the name of Forster Passage between Bristol Island and the three islands of the Southern Thule group - Southern Thule, Cook and Bellingshausen Islands - in the South Sandwich Islands, and in the name of the plant genus Forstera of South America, Australia and New Zealand, a herb in the trigger-plant family named by Linnaeus in 1780. He is also commemorated in place names in New Zealand (Lake Forster at Dusky Sound, and Mount Forster), and in dozens of names of plants, birds and other animals.

See:  The Linnean Society of London - The Johann Forster manuscripts

Johan Forster; Observations Made during a Voyage round the World; 1778