surveyor, mathematician and eccentric, was born of English parents in the Himalayan foothills at Dehra Dun, India, on 17 January 1927.

His father was geodesist Guy Bomford, an officer in the Royal Engineers attached to the Survey of India, and his mother was Audrey Edith, née Barclay. In 1934 his parents divorced. His mother married Charles Trigg and had a second son, Nicholas. His father married Annette Brown, with whom he had two more sons, Rodney and Christopher. 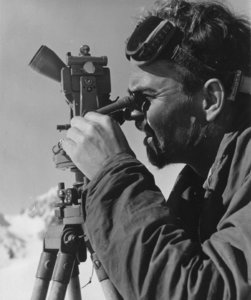 Bomford went to Shrewsbury School in England and immediately after leaving school in 1944 joined the Royal Engineers, who supported his engineering and mathematics studies at Pembroke College (Cambridge), where he achieved first class honours. In the late 1940s and early 1950s Bomford led several expeditions for the British Schools Exploring Society to northern Quebec, Iceland, and Finnish Lapland. In 1951 he married Adelaide-born Elizabeth Ann Honey. He worked for the British Overseas Survey in Tanganyika {Tanzania} from 1953 to 1955.

Bomford was the chief surveyor on Duncan CARSE's eight man expedition to South Georgia of September 1955 - April 1956. This was one of the highlights of Bomford's life. With him he took a remarkably durable homemade tent which he himself had made, stitching the tent's French seams on a Singer sewing machine bought with money given to him and his wife on their wedding. During six months on South Georgia he and his companions surveyed the whole island, often in most unsympathetic weather, manhauling sledges of surveying gear and living in tents. The resulting map of the island established a new standard in Antarctic mapping, for which he won the 1957 Ness Award of the Royal Geographical Society. For more than 40 years since then it has been the definitive map of the island. 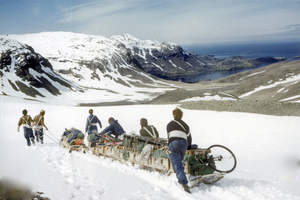 His time on South Georgia was so successful that the Falkland Islands Dependencies Survey (later British Antarctic Survey) invited Bomford to return as base leader of the  overwintering expedition at Stonington Island.  He declined this offer in order to spend time with his wife and children, who eventually numbered four - Richard (b1952), Mary (b1953), Philip (b1960) and Annabel (b1964).

After working for the Australian Army Survey Corps (1958-60) and in Britain with the Ordnance Survey, he settled in Australia in 1961 and joined the Division of National Mapping. He was President of the Institute of Surveyors, Australia (1975-76) and Director of National Mapping (1977-82). From 1974, inspired by the work of MC Escher, he made hooked rugs with mathematical themes, two of which are now in the National Gallery of Australia in Canberra. 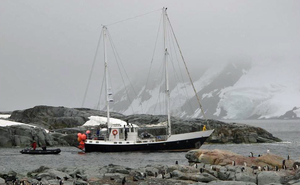 Bomford retired early, aged 55, in 1982. Among his many journeys after that time, was one aboard Jerome Poncet's 20 metre ice-strengthened schooner Golden Fleece during its 1998 circumnavigation of South Georgia.

He died of cancer in Canberra on 10 May 2003, attended by his family and Jenny Chapman, companion on many adventures in his last ten years. His papers are now in the National Library of Australia.

Bomford was 'essentially a restless, irrepressible adventurer' - an eccentric, a renaissance man and a generous person. He had a healthy imagination, great sense of humour and immense interest in other people, and was stimulating (and sometimes exhausting) company. His early work with young people through the British Schools Exploring Society is commemorated by the Bomford Prize for 'youthful endeavour', first awarded by the Government of South Georgia and the South Sandwich Islands in 2005. 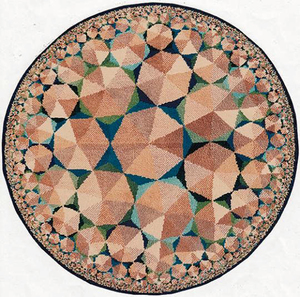 Editorial comment: There were four Carse expeditions to complete the survey of South Georgia, of which Bomford was on one.