American academic, was the son of a German professor, Julius Goebel (1857-1931), who emigrated to the USA in 1881 and taught at the University of Illinois. Julius junior was educated to LLB and PhD and acted as legal adviser to the Swiss Legation in Washington. He married Dr Dorothy Burne. During the years 1915 and 1916 Columbia University awarded him a scholarship which enabled him to visit the Spanish archives at Simancas, and Madrid. As associate in law at Columbia University he wrote The Struggle for the Falkland Islands which was published by Yale University Press in 1927 and reprinted in 1982 with an introduction by Prof JCJ Metford of Bristol University. 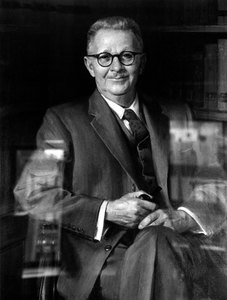 Metford's introduction describes Goebel's work as: 'the only substantial work in English' [to back the Argentine claim] and as 'an impressive examination of the material available at that date'. Metford points out that the book was written: 'when isolationism in the USA was at its most vociferous, and nowhere more so than in the Law School of Yale University' but he concedes that 'it must be acknowledged that he [Goebel] approached the question of the sovereignty of the Falkland Islands with commendable scholarly integrity'.

The Foreign Office in London studied the book in 1927 at the suggestion of their chargé d'affaires in Buenos Aires, Victor Mallett, who urged that a rebuttal be published. One official minuted: 'I do not find in it any great perversion of fact. It is rather in the patently and consistently hostile deductions from these facts that we have cause to quarrel with the author'. The general view was that it was best to let matters lie. C Duff minuted:

This old controversy is quite dead - the Argentine press never refers to it nowadays and, as far as I know, there has been only one public reference to it worth noting in Argentina during the last few years and that by a "stunt" politician. It would be a mistake to revive the question by getting reviews published here or in BA of Goebel's book which appears to have been ignored in both countries.

This was the final decision although the despatch so informing Buenos Aires enclosed a Foreign Office library paper on the background to the dispute which (perhaps not surprisingly in the heyday of empire) made no reference to the Islanders or any right of self-determination they might enjoy.

The Spanish edition, La Pugna por las Islas Malvinas, was published by the Argentine navy (to whom Goebel had generously ceded his rights) in Buenos Aires in 1950.

Although Goebel's scholarship impressed the Foreign Office in 1927, there is no sign that he visited the archives in London or Buenos Aires and his grasp of the 1820s and 1830s is far from sure. But his book has certainly been influential in providing academic backing for the resurrection of the Argentine claim.