Norwegian sea-captain, whaler and leader of scientific expeditions, was born on 7 August 1860 the son of Ellen Andrea née Ingebrigtsen and Captain Ole Christian Larsen from Østre Halsen outside Larvik, a port town in Southern Norway. He went to sea as a young boy, and sailed on vessels hunting the small bottlenose whales in the North Sea. This was an expanding industry and Larsen was given the command of a bottlenose vessel owned by Christen Christensen from nearby Sandefjord. Their association would become important for the future development of the whaling industry. 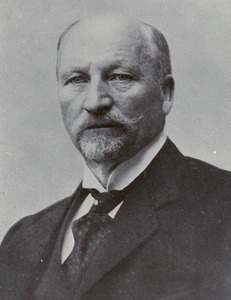 In the 1880s modern whaling was developing along the shores of Northern Norway. The whalers were now able to chase the large, fast swimming rorquals (blue whales, fin whales, humpback whales) with new powerful technology. The possibility of new whaling grounds in Antarctica was also being considered and in the southern summer of 1892/93, three expeditions went south. One was organized by Christen Christensen, who had the ideas, capital and a vessel named Jason, a former sealing ship. CA Larsen was hired as captain and expedition leader.

The Jason expedition caught no whales, but observed them in abundance. The expedition was also of some scientific significance. It sailed south in the western parts of the Weddell Sea, and made some scientific discoveries finding fossilised wood at Seymore Island. After returning home to Norway, Larsen and Jason again sailed south for a second season (1893/94), this time accompanied by two more vessels, Castor and Hertha. Jason sailed back into the Weddell Sea where new geographical discoveries were made and she worked her way further south than any previous vessel in this area of Antarctica (68°10'S). The ships also visited South Georgia, arriving there on 19 April 1894. They entered several harbours along the coast and harpooned two right whales. Although both of these got away, Larsen, after returning to Norway, put forward the idea of starting a whaling operation in South Georgia. He did not, however, immediately proceed with his southern whaling plans. Instead he worked as a manager at a Finnmark (Northern Norway) shore whaling station in the late 1890s, and got valuable experience with the modern whaling industry. 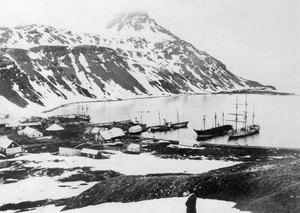 In 1901 Larsen again travelled to Antarctica. He was now hired as the captain of Antarctic, the vessel of the first Swedish South Polar Expedition led by Otto NORDENSKJÖLD. This expedition carried out an extensive scientific programme along the Antarctic Peninsula, the Falkland Islands and Tierra del Fuego in South America. Antarctic also visited South Georgia in 1902, arriving in Jason Harbour, Cumberland West Bay, on April 22. Reconnaissance trips were made up and down the coast, and a shore party made its way from Maiviken to a sheltered cove in Cumberland East Bay which appeared to be a former sealing site. This was named Grytviken. Larsen took Antarctic in there on 14 May. The expedition stayed in Grytviken for a month, and Larsen's plans to start whaling at this particular site gradually materialized.

The Nordenskjöld expedition had a dramatic ending in 1903. In February Antarctic was crushed by the ice and sank in the Weddell Sea, east of Paulet Island, on its way to pick up a shore party at Snow Hill Island further south. Before entering the ice, another shore party had been left at Hope Bay on the northern tip of the peninsula. Consequently, the expedition members - without a vessel - were spread on three different locations where they had to winter. After an epic of survival, scientists and sailors were rescued by an Argentine vessel in November 1903 and brought to Buenos Aires.

This short stay in the Argentine capital was significant for Larsen. He presented his ideas about South Georgia whaling to the local business community, and suggested founding a company and setting up a shore-based whaling station in Grytviken. The company was named Compañia Argentina de Pesca. Larsen returned to Norway, but went to South Georgia in the autumn of 1904 with three vessels (the steam catcher Fortuna and the two transports Rolf and Louise), crew and equipment to erect a shore plant. Their arrival at South Georgia on 16 November 1904 marks the beginning of modern whaling in Antarctica. South Georgia, together with the South Shetlands, where whaling started in 1905, became the major whaling ground for years to come.

CA Larsen managed the Grytviken station until 1914. He extended the plant and in 1913 built the church for the whalers. In his last years on South Georgia, he considered plans for whaling in other areas, but instead he returned to Norway and his home outside Oslo. He bought two large inland farms and planned to develop them into model breeding farms. But he had limited success, and once more turned his attention to Antarctica and whaling. 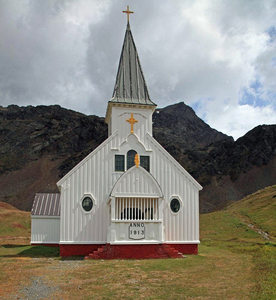 It was well known that there were large numbers of whales in the Ross Sea, and in 1922 Larsen co-founded a company to pursue whaling there. In 1923 the factory ship Sir James Clark Ross steamed south together with catcher boats and CA Larsen as the expedition leader. They worked their way through the ice into the open waters of the Ross Sea. The whaling was successful, and the expedition proved that modern whaling could be undertaken independently of shore bases. This led the way for the next big expansion of the Antarctic whaling industry, the pelagic* whaling.

Larsen was back in the Ross Sea next season. For some time his health had been failing, and he died on the whaling ground on 8 December 1924.

CA Larsen was a pioneer whaler, transferring shore station whaling from the northern to the southern hemisphere, and venturing into the Ross Sea. He was also one of the most remarkable expedition leaders of the so-called Heroic Age of Antarctic exploration - the decades before and after the turn of the century. His skill as a captain in the rough Antarctic waters was well known. Unusually for a sailor, Larsen also took an interest in scientific matters during the two Jason expeditions and the Antarctic expedition and during his years at South Georgia. 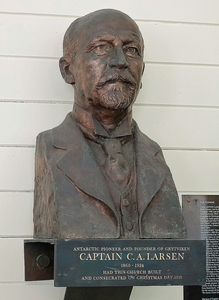 Bust of C A Larsen in Grytviken...

Larsen was married to Andrine née Thorsen (1863-1959). They had eight children of whom six survived.

See: The whalers church at Grytviken in South Georgia