Swedish explorer and scientist, was born on 6 December 1869 on the estate Sjögle, Mariannelund, Småland, Sweden.

He had four sisters and his father, Gustaf Nordenskjöld, was an army captain. His mother, Anna, born Nordenskiöld (note different spelling), was the sister of the well known polar explorer Adolf Erik Nordenskiöld, who was the first to sail through the North-East Passage between Europe and the Far East. Adolf Erik may have inspired Otto Nordenskjöld's development into a geologist and polar explorer but there were many other members of the family who had explored distant corners of the world. 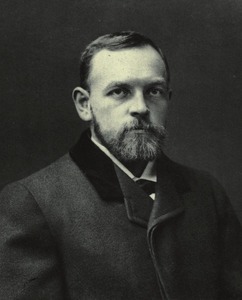 His early schooling was carried out in Jönköping and Östersund, and in 1886 he started at the University of Uppsala, to study chemistry and geology. In 1894 he presented his PhD and became an assistant professor of mineralogy and geology. This made it possible for Nordenskjöld to start his career of research exploration and already in 1894 he started to plan for Antarctic exploration.

His first expedition however was to Patagonia and Tierra del Fuego in 1895 to 1897 where he established contacts that were to be valuable during his Antarctic expedition. In 1898, his second expedition went to Klondyke in Alaska and in 1900 he participated as geologist in CG Amdrup's expedition to the east coast of Greenland. On the way back he met his wife to be, Karen Berg, the daughter of a Norwegian whaler living in Dyrafjord on Iceland. 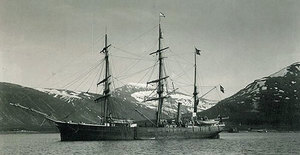 When he returned to Sweden, Nordenskjöld started to plan his expedition to the Antarctic. CA LARSEN was engaged as Captain and the expedition ship Antarctic purchased. In October 1901 the expedition left Sweden, arriving in Buenos Aires on 16 December.

They also visited the Falkland Islands on 30-31 December to pick up a number of dogs and two able seamen before continuing south. When they arrived in Stanley they visited the Swedish Consulate, and Nordenskjöld and C A Larsen visited Governor GREY-WILSON. They were invited to celebrate New Year's Eve at Government House which they did. They bought a number of dogs which they took with them to the Antarctic and before leaving on New Year's Day 1902, Nordenskjöld was able to ride out into Camp and study stone runs, which interested him as a geologist. 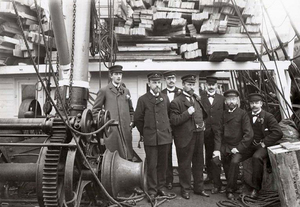 Officers of the Swedish Antarctic...

The expedition built a house on Snow Hill Island on the east coast of the Antarctic Peninsula, and during the southern winter of 1902 parts of the expedition spent time on South Georgia, exploring the Island and naming various places including Grytviken. During this period they also visited the Falklands a couple of times. In the southern summer of 1902-3 the Antarctic tried to return to Snow Hill to relieve the wintering party but the ice situation was so bad that the ship was crushed and sank on 12 February 1903. So they all had to spend another winter in the Antarctic, spread out in three different locations. An Argentine relief expedition with the ship Uruguay was able to rescue them all on 8 November 1903 and they were brought back to Buenos Aires.

After returning from the Antarctic, Nordenskjöld became professor at the University of Gothenburg in 1905 and the same year he married Karen Berg. They had four children, Anna (b1906), Estrid (b1909), Gustaf (b1911) and Martha (b1914). His last polar expedition took him to Greenland in 1909 but his final expedition was to Peru and Chile in 1920-21. 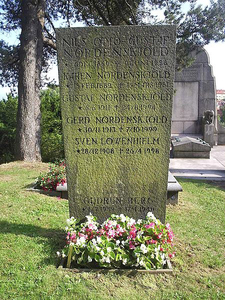 On 2 June 1928 Nordenskjöld was run over by a bus close to his home in Gothenburg: ironic that he, who so often exposed himself to great dangers in his expeditions, lost his life in a traffic accident outside his home.

During his career, Nordenskjöld published and participated in a large number of articles and books including Two Years in the Antarctic (1904) and Scientific Results of the Swedish South Polar Expedition 1902-1903 (1904-20, 6 volumes, 4000 pages). He stands out as the pioneer of Swedish Antarctic explorers.

Nils Otto Gustaf Nordenskjold;  Antarctica: Or, Two years amongst the ice of the South Pole; 1905