governor, was born on 7 April 1852 in Kent, the youngest son of Andrew Wilson and his wife Charlotte, a granddaughter of the first Earl Grey.

He was educated at Cheltenham College and at the young age of 22 benefited from his mother's connections by being appointed as private secretary to Sir William Grey, then governor of Jamaica. His successful career in the Colonial Service included stints as clerk of the Executive and Legislative Councils in British Honduras {Belize}(1878), magistrate in charge of scouts on the Mexican Frontier (1879), special commissioner to take over territory between Sierra Leone and Liberia and assistant colonial secretary, Gold Coast {Ghana}(1884). 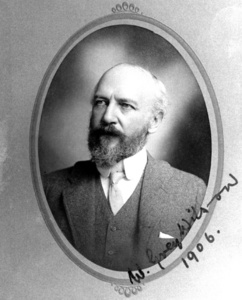 His association with the South Atlantic began on St Helena where he was first colonial secretary (1886) and then governor (1887-1897).

He married Margaret Brown in 1884 and they had two sons (Willie and Robin) and one daughter (Sybil), all of whom were young enough to accompany them to the Falkland Islands, where Grey-Wilson was posted as governor in 1897. They arrived in Stanley on 20 October 1897.

His early days in the Islands saw him courting controversy when, at a Roman Catholic fundraising event, he spoke of the benefits of disestablishing the Church in the Colonies. At his next appearance at a St Mary's bazaar he was forced to return to the subject to correct the impression given by stating that he was only in favour of disestablishment in so far as it meant that the receipt of state aid - in fact given to all three denominations in the Falklands - would lead to a weakening of self-sufficiency. 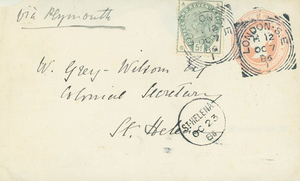 Mail sent to Grey-Wilson during his...

The need for financial prudence and a preoccupation with financial matters characterised his governorship, whether expressed at school prize-givings by admonishing a tendency to extravagance and urging the duty of thrift or shown in practical reforms by introducing a paper currency in the Falklands and ensuring that the notes were of denominations to suit both Stanley folk and Campers.

Unfortunately his drive for economy was not practised to such good effect in his determination to reconstruct Government House, where in his own words 'nothing short of heroic measures were needed'. Despite his confidence that local bricks could be made at considerably cheaper rates than imported ones, the contractors struggled and the project ran significantly over-budget, with a total expenditure of £3,574 as opposed to the available £2,500. Although his efforts had to be confined in the end to only one wing, it is to Grey-Wilson that the subsequent governors owe their conservatory, their billiard room and (perhaps more important) their central heating. His role in the creation of today's Government House is commemorated in the naming of a guest bedroom after him. 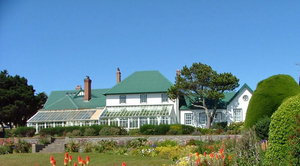 Throughout his time in the Falklands Grey-Wilson and his children participated fully in local life, shining on the sporting, rather than in the academic field. The Falkland Islands Magazine records prizes in tug o'war and egg and spoon races, with participation in paper chases and the Governor himself winning a Badminton tournament. He also contributed to the community in more tangible ways by championing the plan to bring a trained nurse down from the UK, which finally reached fruition in 1902, and by overseeing the formation of the fire brigade in 1898.

A short-lived contribution to the Falklands was the approval of a new seal for the colony when, at his instigation, the old crest of the ox was replaced as no longer relevant. The Falkland Islands Magazine for July 1903 rather archly describes the design: 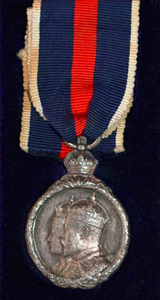 At his suggestion, it represents a seal, a penguin and wild geese. The seal is on a rock or iceberg at the left hand side and a penguin is standing up in his usual stately manner at the other side. The sea, fortunately, separates the two, as we are told a seal does not at all object to a penguin for dinner. They have been seen to catch and play with them as a cat does with a mouse, throwing them up into the air out of the water. The geese are flying overhead.

Unfortunately the design received neither formal approval, nor public acclamation and by 1906 Grey-Wilson's successor ALLARDYCE reported that it had been discontinued.

Probably more welcome to Islanders were his efforts to simplify complex legislation, in particular that relating to land, which he carried out to respond to the needs of a largely untrained judiciary.

He left the Falklands in 1904 to become governor of the Bahamas where he remained until 1912 and continued to champion the ideals of universal unswerving British justice to which his service in the colonies had accustomed him. 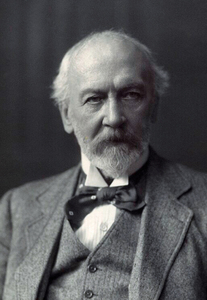 On his retirement he spent two quiet years in an England where he had not lived for 40 years, but the start of World War I saw him once again responding to his country's call and he became chairman of the Central Committee for National Patriotic Organisations and chairman of the Institute of Patentees. Less predictably he played a leading role in the animal charity, Our Dumb Friends League.