He was educated at Charterhouse and followed his father's footsteps into the Colonial Service in 1877, becoming chief clerk to the government secretary in British Guiana {Guyana} in 1889. His subsequent career involved postings as assistant colonial secretary in Mauritius and acting colonial secretary then commissioner in the Turks and Caicos Islands ; administrator, Dominica , where he received the CMG in 1907; governor and commande...n-chief of the Leeward Islands , administrator and colonial secretary, St Lucia ; acting governor and commander-in-chief Windward Islands (May-December 1914). 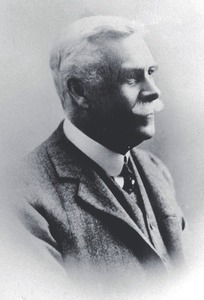 The Falklands was his last posting and he arrived there in May 1915 with his sister (he never married). He arrived in the South Atlantic some five months after the Battle of the Falkland Islands and as a result saw a relatively quiet time in comparison to his contemporaries closer to the field of conflict. However, as the colonial secretary reported, the large quantities of whale oil and wool sent to the UK were a more important contribution to the needs of the Empire than the small contribution of manpower the colony could support. That contribution was nevertheless made, with 76 Falkland Islanders appearing on the Role of Honour for having seen active service for their country, nine of whom died during Young's term of office.

That Young was working hard is not in doubt - it was not until November 1916 that he made his first appearance at a community social event and then he chose a concert in aid of the Red Cross, its fund-raising credentials no doubt providing the spur to emerge from his office. Prior to that he was fortunate in his sister's presence to act in his stead at school prize-giving days. Despite the lack of military activity in the South Atlantic, Young worked hard for the war effort, introducing a measure to ensure that 10% of the colony's revenue was to be contributed to the Interest and Sinking Fund of the Imperial Loan. 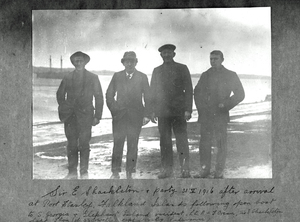 It was to Governor Young that the honour fell to send the first telegraph message when the cable link with Montevideo was made on 29 August 1915. In true colonial style this was a message of 'assurance of their loyalty and devotion to His Majesty's Person'.

The event which put the Islands before the British public during Young's term of office was surprisingly nothing to do with the War, nor anything for which Young himself could take credit. In June 1916 Sir Ernest SHACKLETON arrived in the Falklands to organise a rescue for his men after his epic voyage from Elephant Island to South Georgia. The Governor's contribution was to chair a public meeting at which Shackleton gave an account of the expedition and its heroic end. 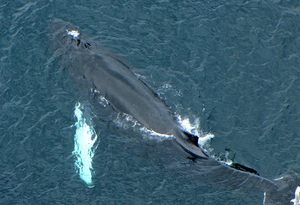 Despite a somewhat undistinguished governorship Young was made a KBE in 1919. This was the first award of its kind to a serving governor while in office and was seen as much a reflection of the growing importance of the territory as a recognition of Young's personal contribution.

He and his sister left the Falklands on holiday on 27 September 1919 on the SS Kenuta. He was never to return and retired to the village of Nackington near Canterbury in 1920.