farmer, was born on 22 May 1915 at Melmerby near Penrith, Cumberland, the ninth of ten children of tenant farmer James Beaty and his wife Eleanor, née Smith.

He won a scholarship to Penrith Grammar School and studied at King's College, Durham University where he obtained a first class degree in Agriculture.

After a period as farm bailiff and working for an animal feed firm, he was offered a post as stock inspector in the Colonial Service in the Falkland Islands. This enabled him to marry his fiancée Ada Pinkerton, who thought she was off to a Scottish island. They sailed at the end of August 1939 and spent part of the journey out guarding prisoners and painting the ship grey when war was declared. 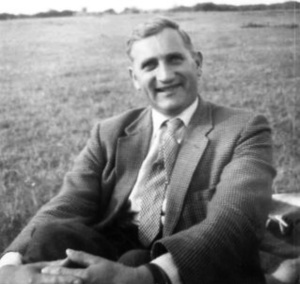 Based in Stanley, the chief duty of stock inspector was to enforce dipping and quarantine regulations which necessitated regular trips round the sheep stations on both East and West Falkland. In wartime Stanley Beaty also encouraged the growing of vegetables on all available land, including the churchyards, a practice which encouraged considerable friendly rivalry between the different denominations, and in developing milk production. His policy of ploughing, growing oat hay and then reseeding with grass overcame winterfeed problems while imported Friesian bulls from New Zealand crossed with local cows produced some excellent milk yields. He was also the nearest the Islands had to a vet at that time.

After leave in 1945 he accepted an offer from the FIC to manage the remote West Falkland sheep station Port Stephens, available as Charlie ROBERTSON had moved to Fox Bay when Tom GILRUTH moved to Darwin. This was in response both to his love of the Falklands and to not considering himself 'civil enough to be a civil servant'. 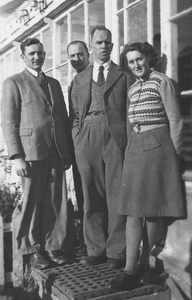 Tom Beaty (left) with other...

He loved the independence and responsibility of camp life and threw himself enthusiastically into the management of this large understocked and under-manned station. He managed to improve productivity by the introduction of cobalt dosing of the flock, following successful trials conducted on the farm. He also experimented with more limited success in later lambing to increase percentages.

In 1949 Beaty and his wife successfully reintroduced the popular West Falkland sports meeting. He was an enthusiastic dog handler and imported prize dogs from his family back in Cumberland. He was made a JP in 1950. 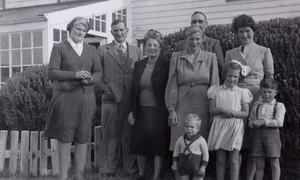 He left the Falklands with regret in 1953 when his children had to go to boarding school in England. He bought a dairy farm in Somerset where he was very active in the National Farmers' Union, becoming county chairman in 1964.

In 1966, leaving the farm in the capable hands of his son Bob, he went to Colombia on a Ministry of Overseas Development project on breeding different breeds of sheep at high altitudes near the equator. Returning home in 1971, he went to Turkey from 1972 to 1980 on a World Bank project to develop their dairy industry.

Beaty maintained a lifelong interest in the Falklands and was always delighted to entertain visiting Kelpers. In his retirement he wrote a book about what he and his wife considered the best years of their lives: Falkland Islands Interlude. They had a daughter Margaret (b1941) and a son Bob (b1943). His wife Ada died in Somerset on 5 August 2001 aged 85.