On leaving Arbroath High School he worked on the family farm until 1930, when an introduction to Fred Langdon, then manager of Fitzroy Farm, led to an offer of employment with the Falkland Islands Company as a farm cadet. 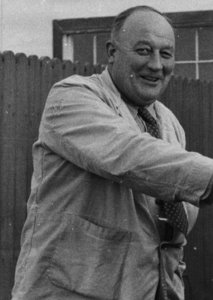 He sailed from Liverpool on 19 September aboard the Orita arriving in Stanley on 14 October 1930. Two days later he sailed into Fitzroy on the Falkland. Working with the men at Fitzroy, he soon learned the skills that made him a good 'Camp' man. His philosophy was to do what he was told and do it better than anyone else.

In 1936 he was appointed assistant to Camp manager George Goddard at Darwin. During this time 'roads' between Fitzroy, Darwin and North Arm were made. The Company acquired Fox Bay West and Spring Point farms and in 1939 Gilruth moved to West Falkland. His task was to integrate the two farms.

The War had just started, labour and materials were in short supply (men had left to join the Forces­ - Gilruth himself was refused leave to do so). Nevertheless he instigated major improvements, a new cookhouse and store were built, the shearing shed enlarged, the water supply improved, and telephone installed. The telephone poles had to be dragged from Fox Bay jetty to Spring Point and Mt Sulivan by horse.

In 1945 Goddard retired and Gilruth was sent to Darwin. He took over as Camp manager after Langdon retired in 1947. The entire breeding policy of all the Company farms was Gilruth's responsibility. In 1946 he flew to Australia and New Zealand where he bought 100 Romney rams to improve the breeding stock. In 1950 he made further purchases in Argentina, Chile and Uruguay. The wool yield increased under his management from 8lbs/head in 1945 to 9¼ lbs/head in 1964. At Darwin, as at Fox Bay, Gilruth improved work and living conditions. New houses were built and others renovated throughout the farms, running water and electricity provided to all houses at Darwin and Goose Green. A new cookhouse and storage sheds were erected and Diesel engines installed for the shear shafts and wool press at Goose Green. 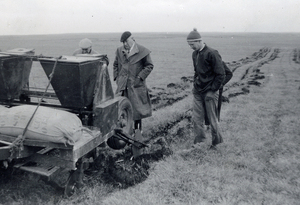 He selected the Fish Creek site for Darwin Boarding School, which provided a quantum leap in the education available to children in the Camp at that time. Attempting to improve the grass, he had a 'sod seeder' made to sow 'Yorkshire Fog' seed directly into the existing white grass; results were mixed.

He planted trees at Goose Green and at Burnside - some thrived. In the early 1950s he helped to distribute trout fry into the rivers and streams that now provide such excellent fishing - alas the dangers to the native Falklands trout were not then foreseen. 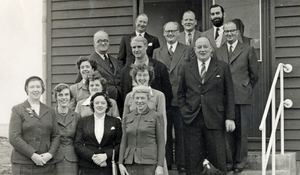 Gilruth was a member of the LegCo for 12 years and sat on ExCo occasionally. He was a JP and acted on occasion as coroner. At Darwin he conducted funerals. He was appointed a Director of the Company in 1957 (serving until 1972) and awarded an OBE in the 1964 New Year's Honours List, for services to the public.

He left the Islands in March 1964 retiring to Arbroath, Scotland where he was a regional councillor for a number of years. Gilruth was a big gentle man with a great sense of fun, humour and fair play but intolerant of incompetence and humbug. A keen fisherman and an excellent shot, he continued to enjoy both sports well into his eighties. He maintained a lifelong interest in the Falklands. 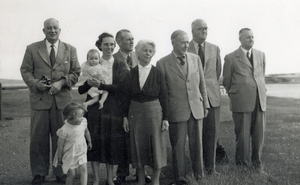 Directors and managers of the...