German colonist, was born in Hamburg, Germany, the son of a family of lawyers.

He was to be apprenticed to the family firm, but being an outdoor type left home to seek his fortune, ending up in 1864, at 20 years of age, sealing off Patagonia where a seal bit off two fingers from his right hand. According to some family members, he was put ashore in Stanley to recover, (but another story says that the ship's crew were cruel to him and that he jumped ship and hid in a cave until the ship had left Stanley). The Aliens' Register of 1867 does not list a Bender, so it is likely that he arrived shortly after that date. Whenever it was that Bender fetched up in Stanley, it was in time to make friends with and impress several settlers in the town, probably by his youthful good looks and industrious habits. 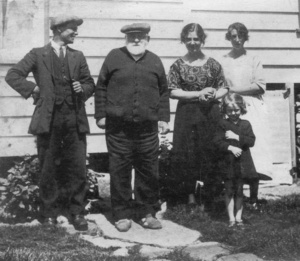 27 The old Deutscher and his family...

On 25 June 1875, Governor D'ARCY granted William COULSON, government messenger, a lease for 21 years of 4,000 acres of Crown Land in Moody Valley west of Stanley. The next day Coulson took Bender into partnership, and with their joint capital and some advances from local merchants (Mrs Orissa DEAN in particular) they stocked the farm with sheep and erected the necessary buildings, at a cost of between £700 and £800.

Management was entirely in the hands of Bender, who resided on the farm. Ten months later, on 24 April 1876, Bender with Edward Nilsson, a native of Sweden, swore an Oath of Allegiance to Queen Victoria at a fee of £5, and became the first 'Five Pound Britisher.' Legislation had not been put in place to provide for such a contingency and so on the 11 May 1876, a retrospective Naturalization Ordinance was passed giving Bender (and Nilsson) 'to all intents and purposes whatsoever entitled, within the limits of this Colony, to all the privileges of British-born subjects of Her Majesty'. It would have been certainly advisable, probably necessary, for Bender to become a naturalised British subject in order to occupy and enjoy the profits of Crown land, and it prevented his internment during World War I. 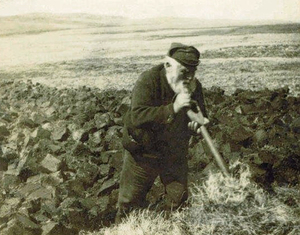 On 23 December 1880 Bender became the sole leaseholder and, after settling a dispute with Coulson involving the Supreme Court, the partnership was dissolved on 7 October 1890. By this time Bender had almost doubled the size of Moody Valley Farm to 7,000 acres by the acquisition of adjoining land from Captain PACKE, and incorporating more Crown land. The land was poor with several stone runs (and included the 1982 battlegrounds of Two Sisters and Mount Tumbledown). Governor KERR considered that Bender overstocked his farm and with the fluctuating price of wool he never became wealthy but rather eked out an honest living by exporting wool and hides and, in addition, supplying Stanley with mutton. In 1916 the Admiralty Wireless Station was built at the head of Stanley Harbour on Bender's land.

On 31 May 1888, he married Hannah Conisbee who gave her age as 30, though her English birth certificate states that she was born on 30 March 1857. Hannah had been companion-seamstress to a wealthy lady taking a world cruise and had been so horribly seasick rounding Cape Horn that she begged to be put off at the next piece of land to recover. It happened to be the Falklands and although she was given a handsome pension and told to make her own way home to rejoin her mistress, Bender courted her and they married in St Mary's Catholic Church. She bore him eight children, (seven girls, one boy,) in the space of 12 years and four months.

As a devout Roman Catholic, it was easier for Bender to pay for one of the nuns in Stanley to come out and be their governess than for seven children to be transported the three miles into town and back every day - one of the earliest examples of a 'travelling teacher'. Even in such a remote colony, the girls were taught to play the piano and to be young ladies. Bender was a strict disciplinarian who would not countenance swearing or drunkenness and insisted on perfect table manners from all his many children. In later years, he was a stout figure with a flowing white beard. He cut his two youngest daughters off without a penny for going to England: Dorothy in 1922 to escape being put upon as the youngest daughter after her mother died on 21 September 1916, and Beatrice in 1923 to marry a naval telegraphist who had served at Moody Brook. In Dorothy's case, Bender promised to pay her return passage if ever she changed her mind, but he knew that his money was safe.

Beatrice's son, Peter MILLAM, returned to the Falklands as the Anglican priest in 1966. Bender's story is that of a foreign pioneer settler, who by grit and determination helped establish a viable economy and stable community; thereby laying the foundation of the prosperous overseas territory we see today.