housewife, was the eldest daughter of William Henry Goss and Ann Goss, née Aitken ('Billie' GOSS was a younger brother). William Henry was a Camp cook when he married and Christina was born at San Carlos. 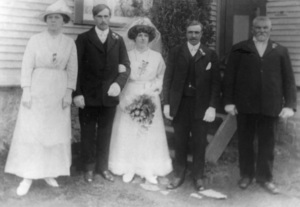 Her moment of fame came in 1914 when the German Asiatic Fleet of Admiral Graf von SPEE targeted the Islands after their victory at Coronel. Although, in the prelude to the Battle of the Falkland Islands, the German squadron of warships was first sighted by a Falkland Islands Volunteer Force outpost, the German colliers were seen approaching the Islands by two teenage girls out riding in the Camp. Christina Goss and Mearon McLeod rode back to the Camp farm where they were working and reported what they had seen to Mrs Felton (later Mrs Creamer) who telephoned the news to Stanley.

The story of the two young girls riding to their mistress with news of what they had seen was a favourite dinner time story of Admiral STURDEE, the commander of the victorious British squadron in the subsequent battle. For their resourceful and prompt action Mrs Felton was awarded the Order of the British Empire, and the girls were each given an inscribed silver teapot. 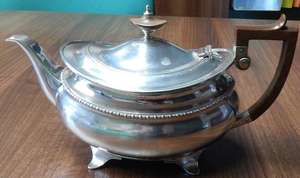 The presentation teapot given to...

After her hour of fame, Christina settled down to be a farmer's wife. She married, on 25 October 1916, at St Mary's Catholic Church, Stanley, Christopher Peter William Bender (b1895). Bender's father (Christoph Peter Wilhelm BENDER) was another of those Islanders who arrived in dubious circumstances, at first hiding in a cave near Stanley. More genteelly, mother was a lady's companion who had to leave her charge, having fallen ill, and convalesce at Stanley. In 1875 Bender entered into partnership with William COULSON who had leased the 4,000 acres of Moody Valley Farm from the Government the previous day. The partnership ended in litigation in 1890 and Bender then farmed by himself. Interestingly the Admiralty Wireless station was erected, after the Battle, on Moody Valley land. The lease of the farm was transferred to Christina's husband in 1926, and there she lived.

Meanwhile three sons were born to the family: James Paul Kenneth (b1917), Sidney Christopher (Jim) (b1918) and William Jacob (1920-1985). The farm seems to have been a constant source of dispute between both generations of Benders and the Government. The former felt they were being overcharged for poor land, and the latter that the Benders were poor farmers (in one governor's words). Whatever the rights of the matter the farm was never a financial success and eventually in 1949 Christopher Bender, Christina, and family were evicted.

The marriage must have been under strain following this and it ended in 1953 with Christina and the two eldest boys emigrating to Australia, while Christopher and the youngest boy left for England. She died on 23 August 1979.

As a postscript, the two elder sons, James Paul and Jim, returned to the Islands in 1992 with the teapot presented to their mother. It is still in the ownership of the family in the Falkland Islands.