JP, schoolmaster, postmaster, registrar, collector of customs, and colonial treasurer was born in Edinburgh on 5 January 1853, the son of Alexander Collins. His mother was the daughter of John Wright, a shoe merchant, and his secondary education (from 1861-1868) was at a long established, well respected, school, George Watson’s Hospital. The Edinburgh Merchants’ Company had close links with the school so Collins’s statement that he won the Company’s essay prize, though unprovable, is logical. 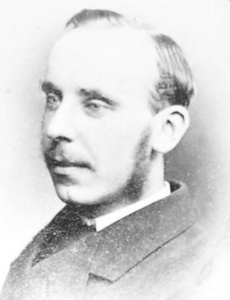 Following school he served a full five year apprenticeship to an Edinburgh tea merchant but a year after finishing his apprenticeship he had embarked on a new career. His entry for the Colonial Office list states he had passed the Edinburgh University local exam with honours in mathematics and history, and that he had studied at Kings College in London but this cannot be verified. Nevertheless, in December 1874 he was appointed government schoolmaster in Stanley, and soon progressed in the Islands’ hierarchy, becoming (May 1878) justice of the peace, then treasurer of the Colony. To this would be added collector of customs, registrar, postmaster, and acting colonial secretary (with a seat on the Executive Council).

Collins had no effective training in any of these roles, and certainly could not have had more than basic bookkeeping skills. The result was that he became overwhelmed by the weight of his responsibilities, and the volume of work they entailed. It is likely that he suffered some form of mental breakdown, manifested by secreting away more and more of the papers, mail and money that came across his desk. This vain attempt to appear to be on top of things is not uncommon in a business environment where someone is given tasks beyond their ability and competence. 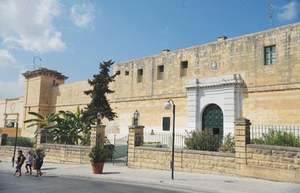 Corradino Prison, Malta (at the...

Governor Thomas KERR called an Executive Council meeting on 19 December 1881 without Collins present. Kerr reported the treasurer’s accounts were irregularly kept and in confusion, and asked two members of the Council to go over the accounts with Collins, and the Governor’s son, Alan was appointed deputy to him in most of his posts. Fortunately for the inexperienced Councillors the captain of HMS Dwarf, then in harbour, allowed Mr Horwill, its Assistant Paymaster, to help in the investigation. In his report Horwill gives a number of examples of the type of errors that had been discovered. They clearly show a lack of competency in basic bookkeeping, and a rushed and error strewn method of working. The conclusion of the report was that – “Although grave errors appear in the accounts, I have not been enabled to discover any defalcations on the part of Mr Collins …….”

Further incidents, including the finding of hidden mail, led the Governor on 31 December 1881, to relieve Collins of all his posts. In the New Year a number of accusations were made to Collins relating to his inability to keep proper accounts and neglect of his duty; in his response he did not hide that he had been careless and inefficient. Thus far Collins’s conduct might well have led to his dismissal but not his prosecution but on 4 January 1882, while a further search was being undertaken, Collins found keys to three office cabinets and in them were four bags of dispatches sent over the past two years to and from the Colony to the Colonial Office. As a result on the 6tJanuary he was arrested and charged with “embezzling and secreting post letters while in the employment of the Post Office”,and at the next sitting of the Supreme Court on 13 January he pleaded guilty andwas sentenced to seven years penal servitude.

No other charges were made against Collins although it was suggested that he had been selling some of the first issue of postage stamps for the Falkland Islands to dealers (names unspecified), and that they had sent him Bank of England notes in payment. Collins may have corresponded with Stamp Dealers in his role as Postmaster but there is no evidence of any fraudulent activity. Governor Kerr, then acting Treasurer, attempted to reconstruct the accounts in the period since Collins took office, and arrived at a defalcation figure of £1,151-6-8d but by June 1883 a Colonial Office audit had reduced this to £738-17-5d. Of this £700 was repaid from a bond that Collins had entered into on 8 October 1879 with the Provident Clerks and General Guarantee Association for £1,400 “as security for the faithful performance of the duties of the office to which he was then permanently appointed” (a rather surprising late discovery and only paid out in part, suggesting the Association felt the authorities in Stanley had contributed to the default). With £20-19-6d from the sale of Collins’s effects the net loss to the Colony was just under £18.

It was impossible for a long-term convict, such as Collins, to serve out their sentence in the Islands but entry into an agreement with another Colony, under the Colonial Prisoners Removal Act of 1869, could not be quickly arranged. The Colonial Office instruction that only Royal Navy ships returning from the Pacific or South East American coast squadrons could be used for transport also imposed a delay while awaiting a suitable vessel. So it was 16 months after his sentence that Collins boarded HMS Thetis (21 April 1883) and he entered Corradino Civil Prison, Malta, on 14 July 1883. Collins remained there for 2¼ years until his release on 17 October 1885, three months prior to his earliest good conduct release date because of his poor state of health. It is probable that this was arranged by the Reverend Dr George Wisely, for many years minister of St Andrew’s Scots Church in Valletta, and Wisely certainly paid Collins’s fare and other items, such as clothing (later reimbursed), for his passage to Australia. Collins is stated to have left Malta on the 18 October 1885 but no definitive evidence of this or any other information as to his subsequent fate has as yet been discovered.