colonist, was born in Shoreditch, London on 17 August 1825, the son of Richard Victor Goss and Sophia Sarah, née Mann. The young man of 17 who arrived at Port Louis in the brig Alarm on 10 April 1842 just three months after Governor MOODY was probably part of an indenture package arranged by G T WHITINGTON in London to provide farm labour for his brother J B WHITINGTON out in the Falklands. In return for their passage the Culey family, which seems to have included Goss, had to work for the Whitingtons for several years at low wages. The deals offered were so bad that the Governor asked that future settlers be warned against them. Goss may still have been working at Port Louis as late as December 1844, though most settlers had moved to Stanley the previous year. 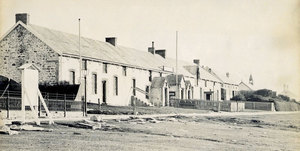 Although his various trades can be presented in a simple sequence the reality is likely to be much more complex with some or most of these strands being carried on simultaneously, and the effort accorded to each varying with circumstances and the opportunity for profit. Once in Stanley Goss started working to make his fortune and within a few years achieved security for his wife and growing family. He married the Plymouth born Ann Elizabeth Pedrick, who was three years his junior. They had nine children: Louisa Ann (b1850), Sophia Jane (b1852), Richard William Napoleon GOSS (b1853), Ann Elizabeth (b1854), Margaret Fanny (b1856), Abner Charles (b1858 - died in infancy), Georgina Helen (b1859), Emily Jane (b1861), William Henry (b1862) and Abner Cosmopolite (b1865). By the time his first child was born, in October 1850, he had bought a whaleboat, and started sealing: he had led work gangs building the roads of the new town, and probably some of the houses too; and he was being paid 6d a day for each prisoner in his care as jailer for the colony. Some of these skills he may have brought to the Islands since he could already have been an apprentice stonemason. It seems significant that the first child was born at 'Pedrick Cottage', his wife's maiden name, and he may well have built it. Four years later he was able to embark on his major building venture.

The plot of land that was Crown Grant No 67 of the 25 March 1854 was bordered by the harbour, the Deanery, Victory Green and Flagstaff Hill in parts. On it Goss built five cottages and, sandwiched between them, a hotel, the Eagle. This arrangement may have given rise to the story that the hotel was built so that it could be divided into nine cottages, one for each of his children. There was a bar selling wine, spirits and draught beer, and a room with bunking for the growing number of seamen who were marooned for a time in Stanley either by wreck or repair. The most famous resident was the great actress Ellaline TERRISS born there on 13 April 1871 but no doubt the sailors were more profitable. From the hotel would branch out naturally some of the other strands of his business, auctioneering no doubt related to the ships on which his lodgers served, and their effects. With supplies of food and drink to obtain for the hotel it was but a step to supplying similar products to visiting shipping, and from this to progress to general merchandise, as well as the ownership of a schooner the Louisa. 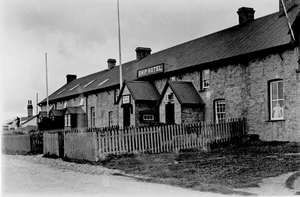 For a successful married man with a family of nine Jacob Napoleon's end seems premature and unnecessarily suspicious. He had made his will in May 1867 and died of 'serious apoplexy' (a stroke) on the 11 September 1868. The fact that his father had died just three days earlier (of 'debility' which given his age, 77, was unsurprising) may have given rise to the legend of their murder by the Colonial Chaplain, the Reverend Charles BULL (since the legend has Reverend Bull fleeing the islands, and he did not leave until 1872 this provides more confusion concerning Jacob Napoleon's death). Other sources say that JM DEAN bought the Eagle Inn when Goss died in July 1875 (bought subsequently by the Falkland Islands Company, it became the Ship Hotel and later still the Upland Goose Hotel) but this is clearly an error. It is true that in that year Goss's widow obtained the grant of a government cottage on the basis that she was destitute; which seems strange given that Jacob Napoleon's will stipulated the business should be carried on for the benefit of the family, and included the hotel, the schooner and a house on John Street. (His wife died in Stanley on 11 September 1904). Whatever the mystery of his fate Jacob Napoleon Goss deserves to be known as one of the founders of modern day Stanley.