shepherd and publican, was born on 5 November 1853 in Stanley, the son of Jacob Victor Napoleon GOSS and Ann Elizabeth, née Pedrick. Born less than a decade after the move to the new settlement of Stanley, Richard Goss's early years were also the early years of the town; when he was four months old his father obtained the grant of the land on which the Eagle Inn was built. No doubt his early years revolved round that establishment where the skills that he later put to use as a publican would have been imbibed. His immediate future, however, lay in the Camp working initially as a gaucho, and then, as the wild cattle were eliminated, learning the skills of a shepherd. Opportunities for romance were limited in such an environment so marriage to Sarah Ann Belcher, the daughter of a shepherd on the same farm may have been inevitable. There was a twelve year difference in age: she was 16 when they married on 20 February 1881 at Holy Trinity Church, Stanley (the consecrated Assembly Rooms), and they then returned to Port Howard. They had at least four children: William Henry Goss , Richard William Napoleon (born before 1888), Ernest Edmund and Eva Malvina . In 1883, a move was made to Stanley; although even five years later his occupation was given as 'gaucho/ shepherd'. Two years after that, now 37 years old, he returned to the trade he had observed as a child and is registered as a publican. 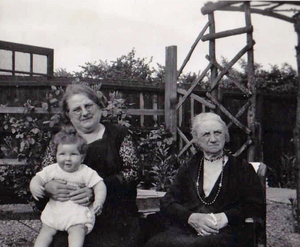 Why, over 50 years after his father arrived from Britain, Goss decided to return there is unknown. In view of his later difficulties it may be that a 'fresh start' was called for but in 1894, with his second son for company, he left the Islands. The rest of the family joined the two pioneers that same year at the public house Richard had found in Belfast. Six years later his wife and family felt another break was needed, not just from the British Isles but from his profession. Perhaps the profits were being consumed in kind by Goss himself but it is definitely stated that by 1900 he had a drink problem. So the family returned to the Falkland Islands, and Goss returned to the craft of a shepherd. He survived for nine more years but a fall from his horse led to his death by exposure at the early age of 56. Richard William Napoleon Goss was probably typical of many men of his time for whom the obvious escape from the hard work and loneliness of early settlement life was exacerbated by his career on the other side of the bar. His wife died in 1937 in Reading.