ship's captain and manager, was born on 27 February 1911 in Stanley, the son of William Henry Goss and Ann, née Aitken.

His first job, after leaving school at the age of 13, was to earn his keep and clothing on the farm of his elder sister, Christina GOSS and her husband Chris Bender at Moody Valley.

But by the age of16 the primary strand of his working life, as a seaman, began, carrying cargo with Jeff Bundes round the islands as a hand in the schooner Shamrock. Supplying tussac grass and penguin eggs to Stanley involved living in the 'Bug Hutch' on Kidney Island for long periods before his first stint as mate, on the drifter Gentoo. 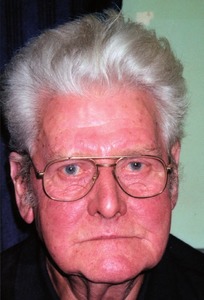 There was probably a break with the sea at the time of his marriage in 1936. He then undertook a variety of jobs for the Falkland Islands Company in Stanley whilst building 62 Davis Street. Then it was back to the Gentoo, this time as skipper, for another three years. 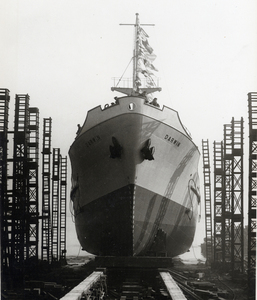 Launching of RMS Darwin at Goole,...

Sixteen years of navigational experience was a sound basis for a period of rising status that culminated in his master's ticket. From third mate to master he was associated with some of the best loved ships in the recent history of the Islands - SS Fitzroy, SS Lafonia, and the RMS Darwin.

On the Fitzroy he was a member of the wartime Operation Tabarin* in Antarctic waters, and his close involvement with the Darwin enabled him to add navigation into the Pool of London to his many experiences; (his only significant absence from the Islands was in 1957 to help supervise the building of this ship). 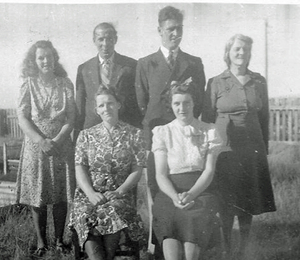 His second major break with the sea was the decade from 1963-73. As farm manager, for much of that time at Port Stephens, he was closely identified with initiatives to improve Islands agriculture. The growing of potatoes and pasture improvement can be added to a role in the eradication of keds* from the sheep population. So, although by 1974 he was back at sea as master of the Monsunen, with Sidney MILLER and Richard Hills he was a founding member of the Livestock Ordinance Committee formed to devise the rules that ensured this disease did not return.

His final ship was the MV Forrest from which he retired at the age of 78 in 1989.

Goss's other interests and offices would be sufficient to occupy the whole of any ordinary person's life. These include secretary of the Sheep Owners Association, chairman of Dean Brothers, long public service not just on both Government councils but also as Justice of the Peace, but these did not preclude him from actively following his hobbies of photography, boxing, and rearing poultry. 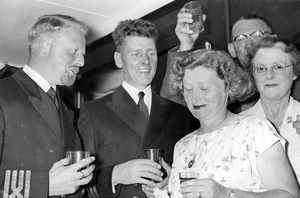 'Bill' Goss MBE would have deserved a place in this dictionary for his maritime experience of the Islands, or for his pioneering work to improve its agriculture, or for his record of public service. He had one other claim to fame though; the only tune he ever sang or whistled was 'Streets of Laredo', a tune played as his coffin left St Mary's in 2002. One of those multi-talented men, committed to public service, who are the backbone of any small community. His grandfather, Jacob Napoleon GOSS, was one of the earliest settlers, and with his father (also William Henry, and remarkably also a ninth child), and with his own longevity (he was 91 when he died) the three generations span almost the whole history of the Falklands.