naturalist, was born at Dynevor Castle, Dyfed, Wales on 6 August 1904, the second son of Sir Reginald Rankin, second baronet and his wife, née the Hon Nest Rhys. He was educated at Eton and Christ Church College, Oxford, and in 1924, he was the photographer with the Oxford University Arctic Expedition to Spitzbergen. From 1929 to 1931 he was staff photographer for The Field. In 1931 he married Lady Jean Dalrymple, elder daughter of the 12th Earl of Stair. They had two sons: Ian (b1932) and Alick (b1935). At the outbreak of World War II, Rankin joined the Scots Guards and became a lieutenant-colonel in 1943. He lived at Calgary on Mull, and before the war had bought the Treshnish Islands, west of Mull, to preserve their wildlife. He died suddenly in Bechuanaland {Botswana} on 7 April 1965, while making a film about Cecil Rhodes. 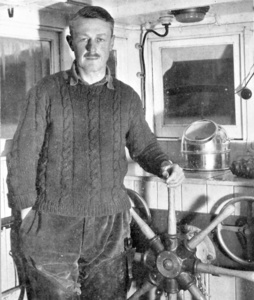 Rankin has been described as laird, farmer, stalker, shooter, climber, conservationist, yachtsman, photographer, ornithologist and writer. He was best known as a traveller and wildlife photographer. He organised expeditions to many parts of the world, including Tibet, Indochina, Iceland, tropical Africa, Australia and Alaska, but he was usually so busy arranging one expedition that he rarely found time to write up the previous one or to print his photographs. The result is that his activities are not well known. He is best remembered for one photograph - a gannet landing on the Bass Rock in the Firth of Forth which won several prizes, among them a European medal presented in 1937 by Hermann Goering - and two books - Haunts of British Divers and Antarctic Isle. The latter describes his expedition to South Georgia.

Rankin visited South Georgia in the austral summer of 1946-7 to photograph and observe its wildlife. The expedition was conceived prior to World War II and before the war had ended he had found the boat he required for navigating in South Georgia waters. This was a 30-year old mahogany lifeboat which had been built for the Royal National Lifeboat Institution but later converted into a cabin cruiser. It was refurbished and had new motors installed. Christian Salvesen's company agreed to transport the boat, renamed Albatross, to South Georgia on the factory ship Southern Venturer. Two Shetlanders, Campbell Gray and Robert Inkster, were engaged as crew and they were joined in South Georgia by a Norwegian whaler, Konrad Olsen. 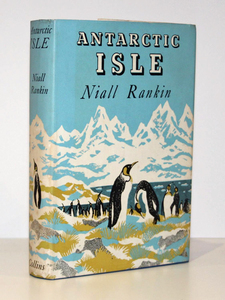 On 6 December 1946, Albatross left Leith Harbour for the Bay of Isles where the breeding behaviour of the king penguin was studied at Salisbury Plain. The wandering albatross was also studied on Albatross Island. After two weeks, a cruise was made along the western end of South Georgia and many landings were made and seabirds counted. On returning to Leith Harbour to restock, Olsen was replaced by Henry Johannessen and Albatross retraced her course to the Bay of Isles and then west again to Elsehul and Bird Island. Leith Harbour was visited again for more supplies and then Albatross headed eastwards to visit Grytviken, Ocean Harbour, Larsen Harbour (where the small colony of Weddell Seals was observed) and Cooper Bay. More photographs were taken and seabird colonies counted.

The last stage of the expedition consisted of catching penguins for zoos in Britain and Albatross was shipped for the UK on Southern Harvester on 20 April 1947. The results of the expedition were published in Rankin's book, Antarctic Isle, one of the best accounts of South Georgia, its birds and seals.

See:  A lifeboat in the Antarctic