medical officer, was born in Fraserburgh, Scotland, on 2 November 1912.

His father, Dr Robert Slessor, was a local physician, and he had one brother and two sisters. He was educated at Fraserburgh Academy, Aberdeen Grammar School, Kiel University, Aberdeen University and Trinity College Dublin, gaining bachelors degrees in medicine and surgery. 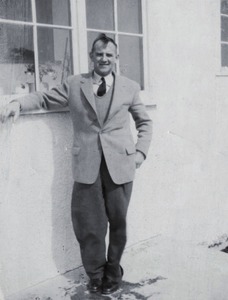 Before the war, Slessor worked in Plymouth, in Berlin, and as a gynaecologist at the Rotunda Hospital in Dublin where he became its assistant master.

He joined the RNVR as a surgeon lieutenant-commander in October, 1941 and served eighteen months aboard the destroyer HMS Wanderer, during which time he was mentioned in despatches for skilfully amputating a seaman's leg during a storm. In April 1943, Slessor was appointed to the WRNS Hospital in Vincent Square, London, becoming deputy to the former polar explorer Surgeon Commander EW 'Ted' Bingham who was its officer-in-charge.

When Bingham became commander of the Falkland Islands Dependencies Survey in 1945, he asked Slessor to be his second-in-command and to set off to Labrador almost immediately to buy a second batch of sledge dogs to boost the small stock that Bingham himself had selected for Operation Tabarin* at Hope Bay in 1944. 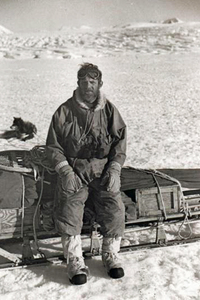 Slessor and his companion, Tom O'Sullivan, knew nothing about dogs, or sledging, but they did their best in buying dogs from various coastal settlements, and in getting fifty-four of them, plus ten newly born puppies, to Port Stanley aboard Trepassey.

On New Year's Day, 1946, Slessor stepped ashore to begin a long association with the Falkland Islands.

In 1946 he was medical officer in the team that built, and wintered at, the first British base on Stonington Island. There, he cared for both dogs and men, and led a pioneering traverse along the crest of the Antarctic Peninsula as far north as the Antarctic Circle. The highest mountain in that area is now known as Slessor Peak, and he was awarded the Polar Medal for his services. 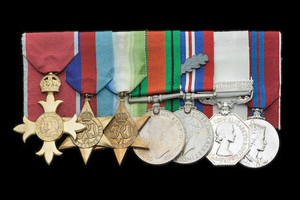 His Antarctic diary, now in BAS Archives, hints at, without revealing, the burden of ill health and the anxieties of leadership that Bingham carried that year.

His liking for the Antarctic, his experience, discretion and judgement made him the ideal person to accompany and guide Bingham's successor, Vivian FUCHS, on the latter's introductory tour of the Dependencies at the end of 1947 and in early part of 1948. Fuchs wrote of him: 'He was a sturdy active man, who always found something that needed doing and then did it. His equable temperament admirably suited our rather strange conditions. Purposeful, sensible, helpful; never did he overplay his hand'.

He warmly supported Governor CLIFFORD's acquisition and use of aircraft for medical purposes, and he enterprisingly used his Kiel connections to recruit German camp-dentists at a time of shortage in Britain. As SMO, Slessor was responsible for the King Edward VII Memorial Hospital, and for its medical staff. 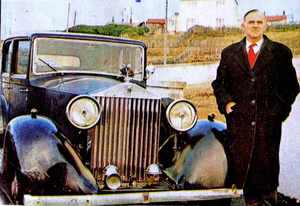 His many years of public service as deputy governor, member of the ExCo and LegCo, and of Stanley Town Council, were recognised in the award of the Coronation Medal in 1952 and the OBE in 1957.

He is remembered as a caring doctor and a good administrator, a good host, and the man who cut quite a dash in his Rolls Royce motor car. Governor HASKARD recalled that Slessor 'knew just about everyone, but was strictly professional in keeping his own counsel, a man regarded with respect and affection'.

On 7 September 1951, in Dublin, Slessor married Sheila Margaret Brough, a nurse whom he had known at the Rotunda. They had no children and she died on 10 May, 1956. Despite this loss, he remained in the Islands until he retired on 31 May 1968 and was given the kind of ceremonial send off aboard RMS Darwin which is normally accorded only to departing governors. 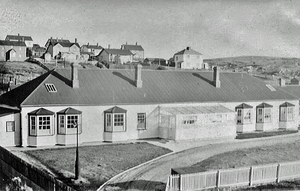 The staff of King Edward Memorial...

He made a new home in Javea, Spain, where he was a keen gardener, an enthusiastic walker, and an exceptional host. He died on 8 July 1985, after walking in the Cairngorms, and was cremated in Aberdeen. His ashes were interred in Port Stanley cemetery, alongside those of his wife.