Argentine meteorologist, writer and diplomat, was born in Buenos Aires on 9 July 1900.  His father was Manuel Moneta and mother Ana Elena, neé Vivot.  From 1912 he lived in Tierra del Fuego for a period where, when 19 years old, he saw Uruguay on her return from a relief voyage to the meteorological station on the South Orkney Islands.  This Argentine naval vessel already had Antarctic fame.  In 1903 she rescued the three marooned parties of the Swedish Antarctic Expedition (1901-03), led by Otto NORDENSKJOLD. 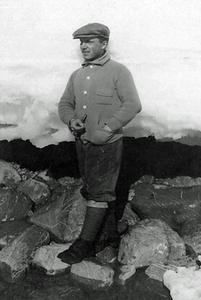 José Manuel Moneta in the...

Moneta developed a strong interest in the Antarctic and came to know much of its literature (his family still has his polar library).  The South Orkney Islands had become of particular Argentine interest. Continuous meteorological observations began there on 26 March 1903 by William BRUCE’s Scottish National Antarctic Expedition (1902-04).  The station was transferred to Argentina on 22 February 1904 following liaison through the British Legation in Buenos Aires and has the record of the longest continuous record of meteorological observations in the Antarctic.

Moneta’s Antarctic interests achieved success when, in 1922, he was appointed by the Ministry of Agriculture as a technical officer in the Argentine Meteorological Service (Servicio Meteorólogico Nacional) to serve for the 1923 a winter at ‘Orcadas’.  He remained employed by that organization until 1946 when it was incorporated in the Directorate of Meteorology, Geophysics, and Hydrography (Dirección de Meteorologia, Geofísica e Hidrología).  During the 1920s he spent four winters on the South Orkney Islands. In the first year he was a meteorological assistant, then assistant leader on the second, and leader of the next two.  He accumulated a total of four years and nine months spent in Antarctic surroundings: profitable and beneficial, not only personally, but also for the idea that began to develop ‘to discover and establish Antarctica for the Argentines’.  Effectively that is what happened.  After returning to Argentina the eminent Buenos Aires newspaper LaPrensa, gave him the opportunity to write more than a hundred illustrated articles about diverse aspects of the Antarctic regions.

Casa Moneta in the South Orkney...

Between the World Wars most of the relief expeditions to the South Orkney Islands passed through South Georgia where the incoming and outgoing personnel travelled aboard several ships to and from Buenos Aires.  The last part of these journeys, from Grytviken to Laurie Island in the South Orkneys, was often aboard a whale catcher chartered for the voyage.  Thus, José Moneta spent time with the whalers and came to know their industry and South Georgia well.

In December 1939, ten years after his return from his fourth expedition, the first edition of his book Cuatro Años en las Orcadas del Sur appeared, published by Ediciones Peuser in Buenos Aires.  This, based on his comprehensive diaries, was highly successful winning a literary prize and having 12 editions in the subsequent 24 years.  A translation in English appeared in 2017 with the cooperation of Moneta’s daughters and other family members.  As well as comprehensive accounts of the South Orkney Islands the book contain contemporary descriptions of Grytviken, ships, administration, communications, and even a whaling voyage. Whaling factory ships, legal and one illegal, which were present in the South Orkney Islands at the time are also described. It is a fascinating book concisely describing very many aspects of Antarctic life during one of the earliest decades of its occupation. 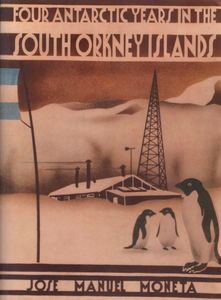 The English translation of ...

In Moneta’s period, change of personnel and receipt of provisions was only a yearly event which broke the physical isolation in January or February. After overcoming several difficulties radio communication was established in March 1927, a major historical event for the island.  As well as communications with Argentina and news of relief voyages, whaling vessels were occasionally in contact.  This was the third occasion of radio contact with the Antarctic. On the night of 24 May of that year, Argentine national day, the newspaper La República and the station LOT Olivos (selected as the best received in the islands) organized a special broadcast when the men at the observatory could hear and speak to their families.

One of Moneta’s hobbies was photography which produced many fascinating images from this early period.  This included a film of life on South Georgia, with a variety of scenes from the Island in general and the whaling industry in particular.  Copies of this, a fascinating record, have survived and are some of the rarest early Antarctic ciné film.  Coincidentally he was on South Georgia, awaiting a ship to Buenos Aires, when the Governor, Arnold Weinholt HODSON, unveiled the granite monument at Sir Ernest SHACKLETON’s grave in February 1928 and filmed these events.  Unfortunately, several searches have yet to locate this length of historical ciné material.

On 23 March 1946 he was appointed to the post of Secretary General of the Comisión Nacional del Antártico of the Foreign Ministry (Ministerio de Relaciones Exteriores y Culto), a post he held until 1949.  His practical knowledge of the whaling industry also resulted in him becoming the principal Argentine delegate to the meeting which established the International Whaling Commission in Washington during November and December 1946.  He was one of the signatories of the convention.  From September to December 1947 he was the Argentine substitute delegate to the United Nations in New York.

Subsequently, until 1954, he held a series of diplomatic posts representing Argentina in Czechoslovakia, Hungary, Turkey and the Philippines.  He remained with the Foreign Ministry until April 1956.

In January and February 1956, he made a fifth visit to the Antarctic aboard BahíaAguirre as a guest of the Instituto Antártico Argentino.  The ship visited Argentine stations in the South Shetland Islands and on the Antarctic Peninsula but, unfortunately, not that on the South Orkney Islands.  In early 1973, however, he made a return visit to Orcadas and was greeted with honours fifty years after he was first there.

The building where he lived on Orcadas was constructed in January 1906 and still stands.  It is named ‘Casa Moneta’: after refurbishment it has become a fascinating museum for the station and is the oldest of the historic huts of the Antarctic to have been in continuous use from its establishment.  Cape Moneta, on Laurie Island, is visible from any ship arriving in Uruguay Cove to reach Orcadas station.