logger and farmer, was born in Vevey, Switzerland on 4 June 1904, eldest of four children of Frederick Ernest Abbott (traveller and bon viveur*) and his wife Ethel Hope Abbott, née Doeg, of Santa Monica, California. On leaving Sydney Grammar School in Australia in 1919, he completed his education in England before moving with his father to Saltspring Island, British Columbia (Canada) in 1922. 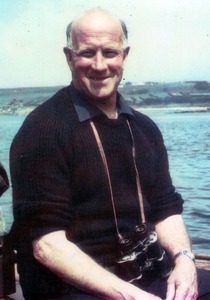 Abbott's father, a fine horseman who had commanded the Prince Albert Detachment in the Royal North West Mounted Police in Canada, travelled extensively with his young family in Australasia between 1905 and 1922. As a boy in Australia and New Zealand, Abbott developed his passion for, and knowledge of, bird-life. To earn a living in Canada he became a trapper. He then worked for many years in logging, initially in the harsh conditions of BC logging camps and then as co-owner of a logging business on Saltspring. In October 1932 he married Irene Oswald, recently arrived from England, who had been born in Stanley in 1912: she had lived at Malvina House, Stanley between 1912 and 1919 when her family moved to England. She would recall the story of the Battle of the Falkland Islands in December 1914 as told by her Falklands-born mother Lilian Gertrude Oswald, née Felton, daughter of John James FELTON who had built Malvina House in the 1880s. They had three sons: Michael (b1933), Donald (b1935) and Clive (b1946).

Following one logging accident too many in 1937, Abbott decided to become a mink farmer. War was declared just as the mink farm was taking off. Abbott volunteered for the Royal Canadian Artillery and sailed to England with the Third Canadian Division. Subsequently, he took part in the Normandy landings. After the war he moved his family to Frensham, Surrey, where he farmed until his wife's death in 1973. 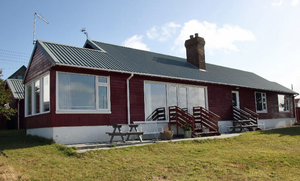 He and his wife visited the Falklands in 1968-1969. He was immediately attracted to the way of life and opportunities for studying the Islands' spectacular bird-life. Following his wife's death he sold his farm, moved to Stanley in 1974 and built Flagstaff House on Villiers Street. He soon became actively involved in community life in Stanley, for instance joining the editorial committee of the Falkland Islands Journal (1974-1982) and becoming chairman of the local branch of the Falkland Islands Committee, flying to London to represent the Islands at a government seminar. An Anglican, he was a regular attender at the Cathedral in Stanley. He spent much time in camp in the summer. Although well into his 70s, he would make himself useful in the shearing shed; not noted for sitting back patiently, he always liked to be active.

When the Islands were invaded in 1982, Abbott stayed in Stanley. As a former soldier he was appalled at the enemy's standards: he chased away food looters more than once. When Stanley was relieved, he made his house available to 2 Para (2nd Battalion, the Parachute Regiment) and it became their mess. He travelled to England briefly in the Canberra in July 1982, privileged as the only civilian passenger, and then returned to the Falklands to sell his house before leaving in 1983. Flagstaff House was sold to the Standard Chartered Bank as a house for their managers. Before leaving, he presented thirteen fine nineteenth-century English coaching prints and some antique chairs to Government House in memory of his Falklands-born wife. He died in Frimley, Hampshire, in April 1986.

In his address at the subsequent memorial service, Lt Col David Chaundler, who had commanded 2 Para when Stanley was liberated, emphasised Abbott's commitment to the Islands. He had presence, energy and generosity and made his contribution to the Falklands through infectious hard work for the community.