French sailor, was born in St Malo on 2 January 1652. He became an officer in the navy and served on expeditions to Greenland , Newfoundland , Africa and Brazil . In 1698 he was chosen by the prominent ship-builder and merchant of St Malo, Noël Danycan de l'Epine, to lead the first French commercial expedition to the South Seas, setting sail with four ships from La Rochelle on 17 December 1698. Beauchesne was said to be the first Frenchman to round Cape Horn and his expedition was a complete success; the Spanish colonists were eager to buy the goods which he had to sell. On his return voyage on 19 January 1701 he discovered the island which now bears his name, lying 30 miles south of East Falkland. Beauchesne died at St Malo on 26 July 1730. His journals are held in the Library of the National Assembly in Paris. 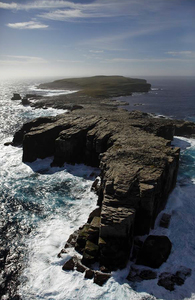 Beauchêne Island is about two miles long by half a mile wide. It has never been inhabited, but served as a base for sealers. It is now a wild animal and bird sanctuary.