surveyor, came from Newcastle and was according to family tradition, a trained carpenter. In August 1765 he was appointed purser in the sloop Carcass, which formed part of the flotilla commanded by Captain John McBRIDE which sailed to establish a settlement in the Falklands. It arrived at Port Egmont in January 1766. 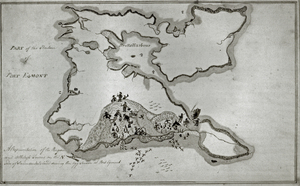 While in the Falklands, Boutflower prepared a map - 'A Draught of Falklands Islands' - showing West Falkland described as the 'Brittish Island' and East as 'French Island', the latter very much smaller than the former!

His lack of training and of background information show in the distorted coastal outlines beyond the northern coast of West Falkland and in the archaic orientation, placing south at the top.

Of more interest and great charm are four sketches or 'representations' of various activities of the settlers: 'the Mullet and Trout Fishery at the E. End of Byron's Sound'; 'the Wild Geese Chace or progging party on Keppels Island'; 'the Sea Lion party at Burnt island'; and 'the Pengwin and Albitrose towns in the N. side of Saunder's Island during the Egg season'. 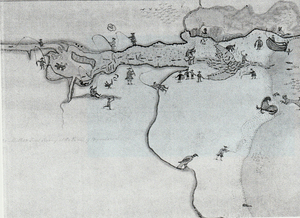 Note the depiction of a Warrah at top...

Drawn with a real sense of fun, these show small figures in large three-cornered hats, accompanied by their dogs, angling, netting fish and shooting geese, watched by warrah foxes and cara-caras. The sketches were probably made for pleasure or to amuse his shipmates and they remained in the possession of his family until the 1970s.