naval officer and expedition leader, was born in Dyserth, Flintshire on 28 September 1927, the second son of Leonard Burley and his wife Edith, née Baker.

He was educated at Solihull School and entered the Royal Navy in September 1945. Having served in various ships, including HMS Kenya during the Korean War, he was appointed to the Antarctic guardship, HMS Protector in 1960. 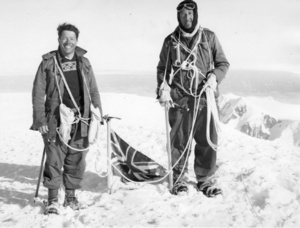 66 At the summit: Burley on the left.

After a successful ascent of Mount Liotard, the highest mountain on Adelaide Island off the Antarctic Peninsula, permission was obtained to climb the highest mountain on South Georgia - Mount Paget, 9,625 feet. Burley, in company with three Royal Marines, reached the second-highest peak on 10 December 1960, but bad weather and lack of time forced them to return to their ship.

This failure rankled and subsequently, partly to redress it, Burley planned and led the Combined Services Expedition to South Georgia in 1964-1965. The expedition came by air through Montevideo and from there in HMS Protector to South Georgia via the Falkland Islands. The expedition had three main aims, run in separate phases. First, to land at King Haakon Bay and retrace and evaluate the route taken by Sir Ernest SHACKLETON and his two companions across the Island to Stromness in 1916; to explore possible alternative routes that he might have taken; and to film the journey for ITV (where it featured as part of the 'Survival' series). 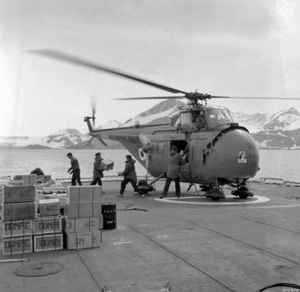 This was completely successful and the expedition was the first to retrace Shackleton's route. The second aim was to climb Mount Paget, and as many other peaks in that area as could be climbed in the time available. Paget and Mount Sugartop (7,623 feet) were successfully climbed, but attempts on Mounts Fagerli and Paulsen failed narrowly owing to poor snow conditions. The third aim was to complete a large-scale survey of the area to the north of Royal Bay, not covered on the ground during the CARSE surveys of the 1950s, but drawn in by BOMFORD to reflect the terrain as best he could.

The field work for this was successfully completed on the last day of the expedition and the map later compiled and printed at 42 Survey Engineer Regiment. Some additional geological and ornithological work was also done, mostly during this third phase. Mount Burley in the survey area was subsequently named after him. 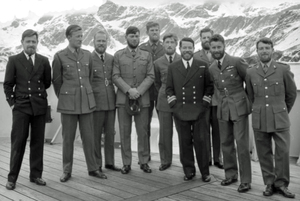 Team members of the Combined Services...

A major achievement of the expedition was the crossing at the end of stage two by the full expedition, with all equipment, including sledges, of the formidable Allardyce range from east to west close to the highest point of the range near Marikoppa (6,035 feet). This was a highly successful expedition in all its phases, in which Burley's positive and cheerful personality was very evident.

He proved a superb leader, as was recognised by the subsequent award of an MBE (also awarded to two other members of the expedition). The members of the party were (in their ranks at the time): from the navy and marines, Lt Cdr MK Burley, Lieut SH Down, Control Artificer PC Langdon and Sgt TD Thompson; from the army, Major JDC Peacock, Capt PF Fagan and Sgt TJ Lynch; from the RAF, Sqdn Ldr AH Back, Sgt HG Hutt and SAC JR Chester. 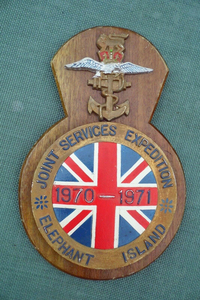 The expedition returned from South Georgia in HMS Protector, working up the results en route and giving lectures to schools and other bodies around South America. In 1966 Burley was awarded the Cuthbert Peek prize of the Royal Geographical Society for leadership of the Combined Services Expedition to South Georgia. In 1989 a set of South Georgia postage stamps was issued to mark the 25th anniversary of the expedition.

In 1970-1971, Burley planned and led another Joint Services Expedition, this time to Elephant Island. The expedition made the first topographical survey of the island and completed a comprehensive scientific programme.

Burley retired from the navy in the rank of commander in 1973 and then served as bursar at Stowe School until he retired for the second time in 1986. In 1986 he was made a Freeman of the City of London.

He married Fiona Macdonald at the Canongate Church in Edinburgh in 1965 on his return from South Georgia. They had three daughters: Ailsa (b1966), Leonie (b1969) and Erica (b1972). He lived in retirement in Suffolk.