historian, was born in Wigtown, in Galloway on 22 June 1907, elder of two daughters of Robert Waddell, a cattle dealer, and Mary, née Brown. She was educated locally, but rejected university, something she later regretted. Her parents' marriage ended while she was in her twenties, and she, with her mother and sister Cathy, made the big, and unusual, step of moving first to South Africa and then Southern Rhodesia {Zimbabwe}. She worked as a secretary and enjoyed life in Africa, panning for gold and travelling extensively. Later she wrote a novel based on this time of her life. When war broke out she travelled to the Middle East to work in General Spears' political and military mission in Syria and Lebanon. It was there that she met and married her husband Edwin CAWKELL in October 1942. Because of army regulations she had to leave the Middle East when she became pregnant. Her only child, a daughter, Rowan, was born in June 1943 after Mary had returned to Rhodesia. Later she joined her husband in England, before sailing for the Falklands in 1950 when her husband was appointed superintendent of education. 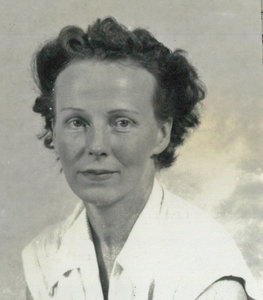 She was appointed honorary secretary of the Broadcasting Committee and in researching her radio talks, under the title of From Then Until Now, she became particularly interested in the complex and controversial story of the Islands with its turbulent years of disputed sovereignty. Her first book, entitled simply The Falkland Islands, was published by Macmillan in 1960. A chapter on the birdlife was added by her husband with Dr Derek Maling contributing chapters on the climate, vegetation and geological structure of the Islands. The book immediately became the standard modern history, replacing VE BOYSON's book of the same title written in 1924.

When the Argentine invasion and subsequent war came in 1982 she was commissioned to write The Falkland Story 1592-1982, a shorter general history of the Falklands of much use to those journalists who had difficulty in placing the Islands. 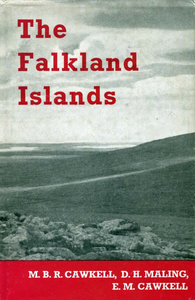 Mary Cawkell's first book on the...

Her third book The History of the Falkland Islands was published by Anthony Nelson in 2001, sadly after her death. This is the standard complete history of the Falklands and produces a compelling story of the Islands through the various attempts at colonisation and disputed possession to the establishment of the British settlement at Stanley in 1845. Subsequent development of the Islands is explored with the evolution of farming, the establishment of schools and other services, through increasing tension and invasion, bringing the story up to the end of the twentieth century.

While living in Stanley Mary Cawkell wrote many articles, humorous and practical, for publication in British magazines, newspapers and collections, shedding light on life as lived in the Falklands - from having a menu of 365 [mutton] to life with a pet king penguin.

She moved to the Gambia in 1956 after her husband was appointed director of education there. Their marriage was dissolved in 1961 and Mary Cawkell lived in Norfolk for a number of years before moving to London and thence to East Sussex. She continued with her journalism and travelled extensively, generally to countries less visited in those days. She became a Buddhist. Later in life she worked almost exclusively on her Falklands history and, retaining her abiding affection, took a great interest in developing events in the Islands.