naval officer, was born in Bridgetown, Barbados, around 1735. He joined the navy as a captain's servant on board HMS Cornwall and, after serving in several other ships, passed for lieutenant on 7 January 1756. On 1 September 1772, at the age of 37, Clayton was appointed in command of the armed shallop Penguin, mounting ten swivels, and ordered to proceed to Port Egmont to take charge of the settlement there. The Penguin had been specially built at Woolwich and was placed in pieces on board the store-ship Endeavour, Lieutenant James Gordon, for passage to the Falklands. The Endeavour, formerly the command of Captain James COOK, sailed from the Nore on 1 December 1772, reaching Port Egmont on 28 February 1773, where the sloop Hound, Commander John Burr, was already at anchor. The following day Clayton landed and took over command of the British settlement there from Burr. The Penguin's complement of 50, which formed the garrison of the settlement, consisted of a master's mate, two midshipmen, two surgeon's mates, 19 seaman, a lieutenant of marines and 23 marines. Clayton's first task was to reassemble the Penguin on shore and she was duly launched on 9 April. A week later the Hound and Endeavour sailed for England, leaving the little Penguin as the settlement's sole protection. The Penguin remained at anchor in the creek for a month, but for some unknown reason she was then hauled up on shore, where she remained until the Endeavour's return. 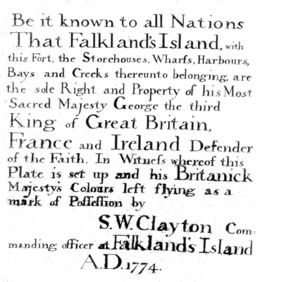 Surgeon's mate Bernard Penrose published an account of the settlement on his return to England, giving an interesting sketch of life on the Islands and paying a generous tribute to Clayton's kindliness and tact, noting that each Sunday Clayton performed divine service. During the week the inhabitants explored the vicinity, hunting, fishing and maintaining the buildings and tending their thirty-eight gardens, about a mile from the settlement. Penrose recorded that on 6 November 1773 the tussock grass was accidentally set alight and before it was extinguished by a heavy downpour the fire had spread for twenty miles, killing hundreds of seals and penguins.

Meanwhile in London, the government had decided to abandon the settlement and the Endeavour was sent back to the Falklands to evacuate Port Egmont, anchoring off the settlement on 23 April 1774. The Penguin was then dismantled and all the settlement's stores were stowed on board the Endeavour. In a letter dated 20 May 1774, Clayton informed Philip Stephens at the Admiralty, that previous to embarking he caused a plate of lead with an inscription engraved on it to be set up on the door of the fort, asserting His Majesty's right to the Falkland Islands with all its dependencies, enclosing a copy of the inscription. He reported that he had left flying His Majesty's colours on the Fort and on the highest hill on the north entrance of the harbour. In the settlement he had left standing the fort, two stone-built storehouses, three stone-built dwelling houses, three sod-built dwelling houses, two piers of stone for boats to land at, one substantial stone wharf and a convenient basin and a crane for landing and loading heavy articles. In addition, there were in various spots several different enclosures and gardens in which plenty of vegetables had been raised. In an enclosure Clayton reported that in February 1774 the whalers Montagu and Thomas from Boston had entered Port Egmont and on 19 May the whaler King George from Rhode Island had also anchored off the settlement. 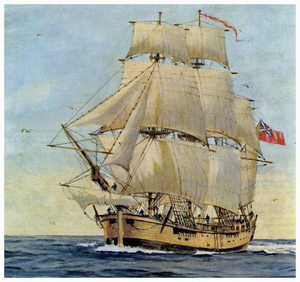 In the last entry in his log, dated 21 May 1774, Clayton recorded that at a half past noon he fixed the lead plate on the door of the fort, the Marines being drawn up under arms with fixed bayonets, with music being played and the drum being beaten. As God save the King was played, Clayton hoisted His Majesty's colours on the fort. At 3 pm, amidst cheers, Clayton and all the officers and ship's company of the Penguin embarked on board the Endeavour which then got under way and set sail for England, reaching Spithead on 19 September and anchoring off Woolwich ten days later.

On his return to England, Clayton wrote a description of the islands, which was published erroneously under the name William Clayton in 1776 by the Royal Society in its Philosophical Transactions. It contained one of the earliest accounts of the natural history of Saunders Island, which he described as 'that barren, dreary, desolate, boggy, rocky spot'. His manuscript account of the flora of the island is held in the British Library. He brought back with him two or three shrubs, which he grew in his garden in Peckham, perhaps the first specimens of the flora of the Falklands to be cultivated in England.

Clayton was promoted commander on 1 August 1776 and captain on 23 April 1778. On reaching the top of the captain's list he was appointed superannuated rear admiral a few months before his death at Peckham in October 1795.

The inscription on the lead plate, which Clayton enclosed in his letter to Stephens reads:

Be it known to all Nations

this Fort, the Storehouses, Wharfs, Harbours,

Bays and Creeks thereunto belonging, are

the sole Right and Property of his Most

of the Faith. In Witness thereof this

Plate is set up and his Britanick

Majesty's Colours left flying as a