was born in Stanley on 28 December 1915, the son of Montague Cecil CRAIGIE-HALKETT and Ann née Robson. As registrar, Montague signed his own son’s birth certificate.

In 1930 Lionel Craigie-Halkett went to the UK to further his education: he attended Shoreham Grammar School and Mostyn House in Cheshire. He joined the RAF in 1936, attaining his pilot’s license in 1937.  An assessment in December 1936 noted that while he could not absorb ground instruction, he had exceptional ability as a pilot. In 1939 he was promoted Flying Officer and when war broke out he was assigned to Bomber Command. In August 1940 he was serving in 213 (B) squadron flying Wellington bombers. On 30 August, commanding a Wellington number T2559, he took part in a bombing raid over Germany. His aircraft was intercepted over the Dutch border and shot down. All six members of the crew were killed. On 3 September the RAF airmen were given a military funeral by the Germans and a single aircraft flew over in tribute. They are buried in the cemetery of the small Dutch village of Zelhem and rest there still under the headstones of the Commonwealth War Graves Commission. 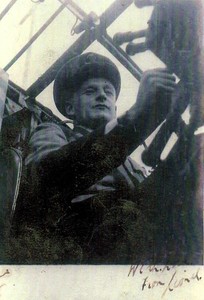 391 Lionel at the controls.

Carol Craigie-Halkett, half-sister to Lionel, also died in an air-craft crash. In February 1964 she was serving as an air-hostess on a Bristol Britannia airliner of British Eagle Airlines when it crashed into a mountain in Switzerland.

(www.findagrave.com mentions Lionel's birthday as Dec.28, 1916 (?)).
There is a monument with the graves in Halle (Zelhem). Every year on two different days (May 4th -rememberance day in the Netherlands, and August 31) we hold a ceremony there. On rememberance day Lionel's name is also mentioned in a special service in the church of Halle (along with the names of the five other British airmen who died on August 30/31-1940. - The children of the highest class of the primary school in the village of Halle adopt the monument every year.
I have pictures of the monument and the headstone of Lionel. - Good to see a picture of him on your site. Yours, Jan Willem.