colonial secretary, was born on 28 December 1880 in Fiji, the son of Frederick CRAIGIE-HALKETT and Edith Amie Craigie-Halkett, née Parry. In 1897 he became acting private secretary to the governor of the Falkland Islands and this post was followed by a variety of clerical and other jobs in the Secretariat and the Treasury. In 1903, the governor reporting a dispute between the colonial treasurer, (WA Thompson, a notoriously difficult man) and Craigie-Halkett, remarked that the latter was 'a good typist and a quick writer, but has little capacity for financial work, his strong points being riding and shooting.' In 1905 Craigie-Halkett was accused of dealing in stamps and reported to the Colonial Office. He protested that he was not aware of any offence, but Governor ALLARDYCE was damning: 'he is untruthful and therefore untrustworthy and consequently not fitted for further civil employment'. London took a less severe line and in 1909 he was appointed a Justice of the Peace.In 1911 he was made postmaster and registrar-general. He supervised the censuses of 1911 and 1921. He served temporarily on LegCo and ExCo on various occasions, and in 1926 became treasurer. Appointed colonial secretary in 1935, he was acting governor on several occasions between 1933 and 1937. He was awarded the OBE in 1934. In 1936, the governor remarked that he was an 'experienced and reliable officer', but that he was constrained by his numerous local relations by marriage. 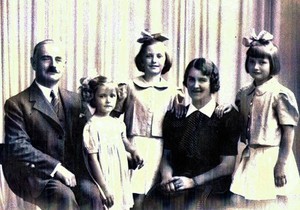 390 Montague with his second family about...

Craigie-Halkett had married Anne Robson, daughter of the owner of Port Louis in 1904. Allardyce disapproved both of the (late) father-in-law and of Anne's notorious and drunken brothers. The Craigie-Halketts had four children: Cecil (b1905), Ursula (b1910), Enid (b1914) and Lionel (b1915). At least two of his children sold their interests in Port Louis north, derived from their mother, back to their father in the 1940s. In 1928, he married Mabel Eleanor Ruby Enestrom, the daughter of Charles Enestrom, engineer, and they had four daughters: Carole, Delia, Joan and Yvonne. He died in Southwark in 1951.

I’ve found this piece of writing incredibly interesting and I would be very happy to know how Lyle Craigie-Halkett Halkett relates to Montague Cecil Halkett ?

Lyle is the grandson of Montague Craigie-Halkett. he has just provided a photo of Montague which i have added to his entry. Now see a new entry, also by Lyle, on Lionel Craigie-Halkett, Montague's son and an RAF pilot killed in 1940.

Hi I am the daughter of Elaine Kathleen Craigie Halkett who was the youngest daughter from Montague's first marriage to Ann Robson. My mother seems to have been omitted from the biography perhaps as a result of an oversight or incomplete records. My sister Yvonne and I have carried out extensive research of the family tree and are interested in sharing information if you are so inclined. We are keen to fill in any blanks that we or you may have and we can be contacted on the email shown.

I would be interested to know how your family links to mine, as I am sure it must?

Montague and Ruby were my grandparents although I never knew my grandfather; he died before I was born. My grandmother was a wonderful person and a true lady.