Anglican bishop, was born in Buenos Aires on 17 September 1919, son of Edward Stanley Cutts and his wife Gabrielle Landry. His parents were of British and Swiss origin and his father's family had lived in Argentina for four generations. However he was educated at Felsted in England, and trained for the priesthood at King's College, London, and the Community of the Resurrection at Mirfield (Yorkshire). After a curacy in Godalming (Surrey) he answered the missionary call and went out with the Society for the Propagation of the Gospel to southern Africa where his work culminated from 1971-1975 as Dean of the Anglican cathedral in Salisbury, Rhodesia {Harare, Zimbabwe}. 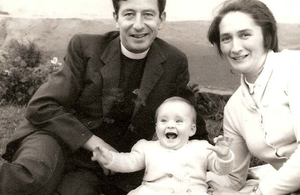 In 1975 Dean Cutts was the first person to be elected by a diocesan synod to become bishop of the diocese which then covered most of Argentina and Uruguay and is now known as the Diocese of Argentina. He was also involved in the formation of a new Anglican Province of the Southern Cone of America to unite all dioceses in that part of the continent. Bishop Cutts, as the commissary* of the Archbishop of Canterbury, used to visit the Falkland Islands once or twice a year, or send one of his clergy.

The inauguration of this new Province had to be postponed after the invasion of the Falkland Islands on 2 April 1982. In fact the Anglican Falkland Islanders had already rejected the proposal to include them in the jurisdiction of the new Province and Archbishop Donald Coggan had agreed to offer them extra-provincial status with pastoral visits from the bishop with the closest geographical and historical links to the Islands (which had always been the bishop in Buenos Aires). 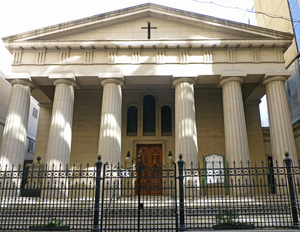 Anglican Cathedral of St. John the...

On the day of the invasion Cutts (after talking to Harry BAGNALL, the Rector in Stanley) he petitioned the military government of General Galtieri to allow him to visit the Islands on his own. This permission was not granted for about two weeks, when the government agreed to allow him to lead a group of Anglo-Argentines, as others were also asking to go. However Cutts had never intended to go with others and he knew that, by then, it was too late and that nothing would be achieved. So he refused to accompany the group which visited Stanley in late April. A few days after the invasion Archbishop Robert Runcie withdrew his permission for Cutts to act as his commissary 'as you cannot be on two sides of a war'.

After the war episcopal pastoral duties in the Falklands were delegated to other bishops and Cutts spent the rest of his ministry in the diocese of Argentina, retiring to England in 1989. He continued to exercise a rural ministry in the Diocese of Lincoln where he was appointed assistant bishop. He died in 1997.

He married Irene Adele Sack in 1960: they had one son and three daughters.

(MA); Anglican priest; missionary in the diocese of Argentina since 1981.