Italian naval officer and painter, was born at Sete near Sorrento in the kingdom of Naples on 29 March 1838.

He studied at the Naval Academy in Naples and joined the navy of the newly established kingdom of Italy.

In 1865 he found himself navigating officer on the steam corvette Ercole (Hercules) in the naval detachment on the River Plate. On 29 March 1866 the Ercole set off on a voyage from Montevideo to the pacific coast of South America, calling at the Falkland Islands on the way. Ercole arrived in Stanley on 19 April under command of Commander Orazio Persichetti. 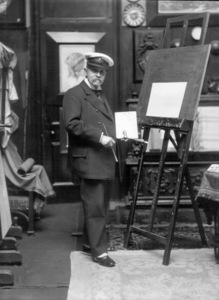 On 21 April the Dutch cargo ship Orange-Nassau arrived in port with a cargo of coal which had caught fire.

De Martino distinguished himself by taking a launch to the burning ship and helping to put out the fire. While in Stanley he painted two watercolours of the town in his sketch book.

In early May Ercole sailed for the Strait of Magellan and on 7 May she ran aground on the Grand Orange Bank in the Strait. De Martino was on watch at the time and maintained that he had warned the Captain – in vain – that their course was dangerous. Commander Persichetti was determined to pin the blame for the grounding on de Martino and a court martial was held after the ship had limped back to Montevideo.

De Martino returned to Italy and in 1866 was present at the battle of Lissa in the Adriatic when an Austrian fleet repulsed an Italian attack on their base.

The following year de Martino returned to South America on board the sail corvette Euridice. He made the acquaintance of the Emperor of Brazil, Don Pedro II, and was commissioned to paint large canvasses of the naval battles in the war between Paraguay and Brazil, Argentina and Uruguay. 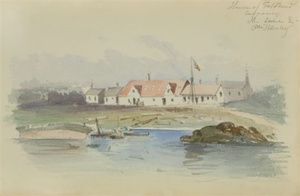 At this stage he decided to resign his commission and become a professional artist.

In 1875 he moved to London and his work found favour with Queen Victoria. In 1894 he was appointed “Marine Painter in Ordinary” by the Queen and her son, later King Edward VII, was equally taken by de Martino.

In 1902 the new King awarded de Martino the honour of Commander of the Royal Victorian Order (CVO) and he was generally known by the unofficial title of Chevalier de Martino. Several of De Martino's paintings are in the Royal Collection. 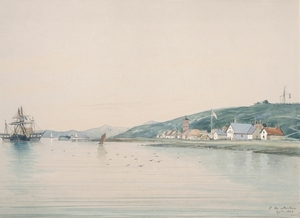 From 1905 onward, he painted also many Italian naval ships.He made a number of paintings during his travels, including of the Brazilian coast.

He also painted depictions of the naval battles of Trafalgar, of the  Nile and of Cape St Vincent. In August 2013, an exhibition of many of the paintings and sketches by De Martino was held at  del Casale Di-meta , in Naples.

See: The Naval Review at Spithead 26 June 1897 - painting by De Martino in the Royal Collection