naval officer, was born at Youghal, Co Cork, in 1732, son of John Farmer from a Northamptonshire family. He went to sea in the merchant service at an early age and later after entering the Royal Navy served as a midshipman in Dreadnought in the West Indies and in Achilles on the home station. 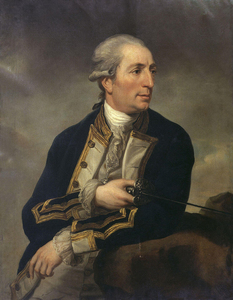 From 1759 to 1761 he was lieutenant on Aurora, after which he was placed on half pay and settled in Norwich. Here he met and married his wife Rebecca Fleming, a naval captain's daughter: the couple had nine children. In 1766 he is said to have given valuable help in suppressing a riot and, thanks to the commendation of the Norwich magistrates, he was promoted commander in 1767.

In September 1769 he was appointed to the sloop Swift and set out for the Falkland Islands. Arriving in March 1770, he found that the Spaniards established at Puerto Soledad (Port Louis) had peremptorily ordered the British garrison at Port Egmont to quit the Islands. As there was no British force to resist any aggression, the senior officer Commander Anthony HUNT determined to go to England with the news, leaving Farmer in command. A few days later the Swift sailed for a cruise round the Islands; in a violent gale she was blown over to the coast of Patagonia and in attempting to enter Port Desire {Puerto Deseado} struck a rock and was utterly lost. The crew escaped to the shore, but as they were entirely destitute, Farmer dispatched the cutter to Port Egmont with orders to the only remaining ship, Favourite, to come to their relief. On 16 April the party arrived safely at Port Egmont. On 4 June 1770 a Spanish frigate anchored in the harbour, presently followed by four others. Their commander, Don Juan Ignacio MADARIAGA, wrote to Farmer that, having with him 1600 troops and a train of artillery, he was in a position to compel the British to quit, if they hesitated any longer. Farmer replied that he would defend himself to the best of his power; but resistance against such an overwhelming force could be no more that complimentary, and accordingly when the Spaniards landed, Farmer, after firing his guns, capitulated on terms. An inventory of the stores was taken and the British were permitted to return home in the Favourite. 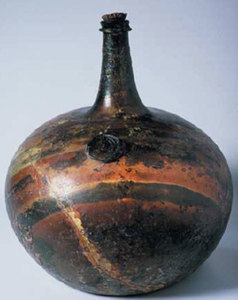 Glass demijohn recovered from the...

After arriving home in September 1770, Farmer was acquitted of all blame for the loss of the Swift, appointed to the sloop Tamar and in 1771 promoted captain. In 1773 he sailed to the East Indies in command of the frigate Seahorse (with Horatio Nelson as one of his midshipmen).

Farmer was a poor leader and Seahorse was not a happy ship. During the American war he was in command of the frigate Quebec, and, based in Guernsey, he destroyed a French coastal convoy on 6 July 1779. But his ship was damaged and after repairs, in which his lost cannon had been replaced with smaller guns, he confronted the large French frigate Surveillante on 6 October. After a long and bloody action the Quebec caught fire and exploded; Farmer and most of his crew perished.

The Admiralty were so impressed by Farmer's 'stubborn gallantry' that they recommended that a baronetcy be conferred on his eldest son George-William.